How much are train tickets from San Diego to Los Angeles? 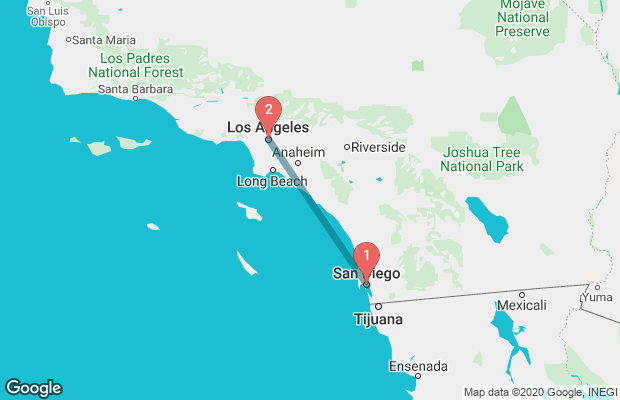 How do you get around L.A. from Union Station?

There are a number of different transportation options to get from Union Station to other parts of Los Angeles.

To get to LAX, passengers can take the LAX Flyaway bus from Bus Stop 9 at Union Station’s Patsaouras Transit Plaza. The cost is $9.75 per person.

In addition, you can summon an Uber or Lyft, or take a taxi from the taxi stand located in front of Union Station West.

Is it safe to travel by train from San Diego to Los Angeles during the COVID-19 pandemic?

Can you take a train all the way from San Diego to Los Angeles?

Yes, there are trains that can take you the entire way from San Diego to Los Angeles. However, there are also some trips on this route that require you to board another vehicle, such as a bus or a shuttle, during your journey. This is worth paying attention to as you book your trip, since a direct train may be preferable for its speed and convenience.

What is the price of a train ticket from San Diego to Los Angeles?

In the last month, DKK 231.25 was the average price of a train ticket from San Diego, CA to Los Angeles, CA. This is a good price that is inexpensive compared to most train fares. You can expect to find tickets at that price or lower if you book your trip at least 21 days in advance. Otherwise, expect to pay around DKK 3.63 more than that for a same-day booking.

How long is the train journey from San Diego to Los Angeles?

The distance between San Diego and Los Angeles is approximately 111 miles, or 179 kilometers. The average train journey between these two cities takes 3 hours and 20 minutes, although the absolute fastest you could get there is 2 hours and 39 minutes. Although it takes a couple of hours each way, it's still possible to make a round trip in a single day. Since most trains are equipped with Wi-Fi, you should be able to browse the Internet or get some work done during your journey.

Trains from San Diego to Los Angeles are the most crowded on Sunday. Tickets also tend to be more expensive then. If you are looking for a great deal on your train tickets or just want extra room to stretch out, consider traveling on Tuesday instead, as it tends to be the least crowded day of the week.

The earliest train departs San Diego at 5:00am while the last train of the day leaves at 6:00pm. To see all scheduled departure times, use the search function on this page to get the full schedule for your specific travel dates.

Is there a direct train from San Diego to Los Angeles?

There are 8 scheduled trains on most days. 24 of these are direct connections to Los Angeles. While direct trains may still make stops along the way, you will not need to switch trains at any point. If you're looking to get to your destination faster, a direct train is the convenient and time-efficient choice.

You can also take a train for your return trip from Los Angeles to San Diego. If you're not not set on traveling by train, you could always take the bus from San Diego to Los Angeles for DKK 93.83.

Which train should you take from San Diego to Los Angeles?

There are two stations in San Diego where you can board the train to Los Angeles:

There are more train stations and stops in Los Angeles than most cities. Most trains from San Diego will stop at one (or more) of the 4 following stations in Los Angeles:

Price trends for trains from San Diego to Los Angeles

(Based on 14 ratings and reviews)