Wanderu is an official partner of Amtrak Cardinal

The Cardinal is one of Amtrak's most scenic train routes, and it's no wonder why. The train passes through the Blue Ridge and Allegheny Mountains, the Shenandoah Valley, and along the New River Gorge National Park, known for its white water rafting. This route becomes even more stunning in late October and early November, when leaf peepers flock onto the Cardinal to view the one-of-a-kind blazing fall foliage along the tracks.

You can pick from an average of 85 trips per day on the Amtrak Cardinal, and depending on your route, train ticket prices range between DKK 27.47 and DKK 1,318.73. You'll be comfortable traveling on the Cardinal thanks to the reclining seats with extra legroom, free WiFi, power outlets at each seat, and snacks available to purchase from Amtrak’s Café Service.

Amtrak has been an official Wanderu partner since 2015, so rest assured that you will find the cheapest and most convenient Amtrak Cardinal tickets right here, at no additional cost. You can even earn Amtrak Guest Rewards points when you purchase your ticket on Wanderu, so have your unique rewards number handy, and get ready to book your next adventure! 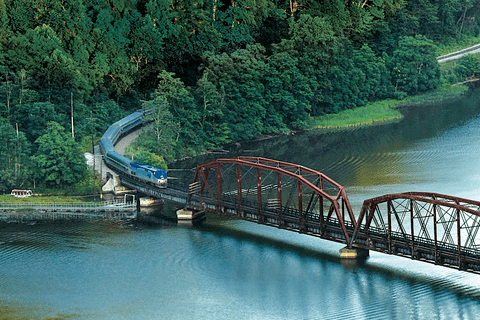 Pros: There was heat and wifi. Cons: Explain to me why I am sitting in the middle of cornfields, not moving, for over 3 hours. Also, improve the quality of the speakers. Once we were 2 hours into being stopped, they finally spoke over the intercom and no one could unde...

Pros: There was heat and wifi. Cons: Explain to me why I am sitting in the middle of cornfields, not moving, for over 3 hours. Also, improve the quality of the speakers. Once we were 2 hours into being stopped, they finally spoke over the intercom and no one could understand what they were saying.

It was clean, and little comfortable.

It was clean, and little comfortable.

Pros: It was clean and comfortable. Cons: It was great. I am not sure why it takes amtrack 5 hours to get to Indy from Chicago when it’s 3 hours drive. I think it takes longer is the only issue.

Pros: It was clean and comfortable. Cons: It was great. I am not sure why it takes amtrack 5 hours to get to Indy from Chicago when it’s 3 hours drive. I think it takes longer is the only issue.

Do Amtrak Cardinal trains have WiFi?

Yes, Amtrak Cardinal offers WiFi on their trains. Although most trips with Amtrak Cardinal will have WiFi as advertised, some trains might not come equipped with WiFi and onboard WiFi can lose its connection in rural areas. We recommend you bring a book or download a movie just to play it safe. Amtrak Cardinal WiFi is generally best used for surfing the web, checking emails and chatting with friends; you shouldn’t count on the WiFi to binge watch your favorite show.

Yes, there are power points onboard Amtrak Cardinal trains. You can generally find one or two sockets per row of seats, so be a good traveller and check if your seat neighbour might want to charge up their devices as well. With the onboard power points, you can charge both a computer and USB devices with a power point USB converter that typically comes with most phones and tablets.

Since Amtrak Cardinal might sometimes use replacement train vehicles, not all trips are guaranteed to have power points. We recommend to bring a power bank to charge your phone for all trips over 2 hours, just in case.

What is Amtrak Cardinal's schedule?

On a typical day, Amtrak Cardinal has 85 scheduled train trips in total. However, the exact departure and arrival times vary depending on the day and route. The best way to find the exact schedule for your trip is to use the search tool on this page.

No, Amtrak Cardinal does not offer will call tickets. You should purchase your tickets online and make sure you have everything you need to board before you arrive at the station.

Yes, Amtrak Cardinal requires you to present an ID to an agent to be allowed to board the train. Make sure you have identification issued by a government agency that meets the carrier’s requirements. Alternative IDs, such as a college ID, won’t work.

Are there toilets on Amtrak Cardinal trains?

Yes, there are bathrooms on Amtrak Cardinal trains. The bathrooms are pretty basic and include a toilet, toilet paper and hand sanitizer. Most bathrooms don’t have running water. As you will be using a bathroom on a moving vehicle, please use caution and hold on to a rail at all times.

Amtrak Cardinal provides snacks to satisfy your hunger during your travels. Be sure to pack a credit card and some cash in case you get hungry.

Do you have to print your Amtrak Cardinal ticket?

Amtrak Cardinal does not require a printed ticket to board the train. Instead, an eTicket is sent to you by email when you make your reservation. You can use your smartphone to show this eTicket to the ticketing agent as you board.

Does Amtrak Cardinal offer any premium features like extra legroom or movies?

Amtrak Cardinal goes the extra distance to deliver premium features to its customers.

Do you find yourself squished in a regular seat or just love having extra room to sprawl out? Well you’re in luck as Amtrak Cardinal offers extra legroom seating. Since there is no standard of what extra legroom is, the extra space you get may vary between train lines, but getting extra is always good.

With 85 Amtrak Cardinal trips per day, there are a lot of great deals to uncover for the bargain hunter and Amtrak Cardinal tickets start at just DKK 27.47. Check out some of the latest and greatest deals snatched up by Wanderu users.