Wanderu is an official partner of Amtrak Pacific Surfliner

The Pacific Surfliner is a passenger train service that runs along the Pacific coast of Southern California, connecting San Luis Obispo to the north with San Diego to the south. The line is part of the national railroad network of Amtrak, the largest passenger train service in America. The Pacific Surfliner is the third most popular Amtrak train route after the Northeast Regional and the Acela.

The Pacific Surfliner was inaugurated in 2000, after the route’s predecessor, the San Diegan, was renamed to better represent the service’s coverage. The new name was based on what the locals called the railroad line that the train utilizes due to its proximity to California’s Pacific Coast – the Surf Line. While the portion between San Luis Obispo and Los Angeles is also served by Amtrak’s Coast Starlight, the Pacific Surfliner is the only Amtrak train that travels from Los Angeles to San Diego.

Running right along the coastline of the Pacific Ocean in Southern California, the Pacific Surfliner is among the most famous Amtrak routes due to the unique scenic views it presents. The train parallels the beach for large portions of the 268-mile ride, so close that the ocean water often hits the car windows.

Like most Amtrak trains, the Pacific Surfliner offers first-class amenities like onboard restrooms, free WiFi, seats with extra legroom and power outlets, as well as a snack bar where you can purchase food & drinks. More importantly, though, the Surfliner serves its name right because it also comes equipped with storage racks for surfboards.

Since Amtrak is an official partner of Wanderu, here you can find the cheapest available Pacific Surfliner train tickets and book the trip that best suits your needs at no additional cost. And if you are an Amtrak Guest Rewards member, don’t forget to enter your unique number during checkout, so you can continue collecting points. 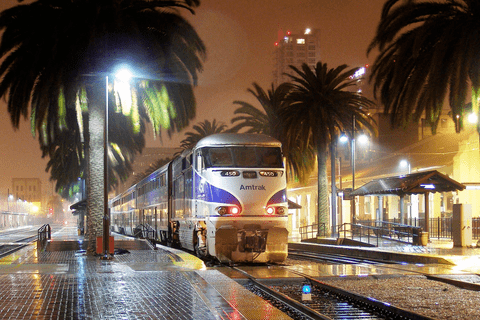 Pros: Fast and convenient. Cons: No improvement needed. Tips: None.

Pros: Fast and convenient. Cons: No improvement needed. Tips: None.

Comfy seating with some tables for groups! The Pacific Surfliner train has a beautiful view.

Comfy seating with some tables for groups! The Pacific Surfliner train has a beautiful view.

Pros: Too short but that was my choice. Cons: Another hour.

Pros: Too short but that was my choice. Cons: Another hour.

Pros: excellent price and comfort. Cons: can’t think of anything. Tips: Get there early because the train is always on time.

Pros: excellent price and comfort. Cons: can’t think of anything. Tips: Get there early because the train is always on time.

How fast is the Pacific Surfliner?

The Pacific Surfliner can go as fast as 90 mph, with an average speed of 41 mph. It takes roughly 5 hours and 45 minutes to travel the entire length of the route between San Diego and San Luis Obispo.

Can I get a refund on a Pacific Surfliner ticket?

You can get a full refund if your ticket is cancelled within 24 hours of your initial reservation. After that, a refund is no longer available.

What amenities are available onboard?

You’ll have access to a wide variety of amenities when traveling on the Pacific Surfliner. Every train consists of a business class car, three coach cars, a café car, and a coach or baggage car. Checked baggage is stored on a lower lever with coach seating provided in the upper level.

Café car: Open to all Pacific Surfliner passengers, the café car offers a great solution to the travelers who didn’t have a time to grab a snack before boarding. No need to worry about the food anymore when you're rushing to catch your train. Ready to satisfy any taste, Pacific Surfliner Cafe offers different meals, snacks and deserts, as well as premium wines and beers.

Yes, there are power points onboard Amtrak Pacific Surfliner trains. You can generally find one or two sockets per row of seats, so be a good traveller and check if your seat neighbour might want to charge up their devices as well. With the onboard power points, you can charge both a computer and USB devices with a power point USB converter that typically comes with most phones and tablets.

Since Amtrak Pacific Surfliner might sometimes use replacement train vehicles, not all trips are guaranteed to have power points. We recommend to bring a power bank to charge your phone for all trips over 2 hours, just in case.

What is Amtrak Pacific Surfliner's schedule?

On a typical day, Amtrak Pacific Surfliner has 1362 scheduled train trips in total. However, the exact departure and arrival times vary depending on the day and route. The best way to find the exact schedule for your trip is to use the search tool on this page.

No, Amtrak Pacific Surfliner does not offer will call tickets. You should purchase your tickets online and make sure you have everything you need to board before you arrive at the station.

Yes, Amtrak Pacific Surfliner requires you to present an ID to an agent to be allowed to board the train. Make sure you have identification issued by a government agency that meets the carrier’s requirements. Alternative IDs, such as a college ID, won’t work.

Are there toilets on Amtrak Pacific Surfliner trains?

Yes, there are bathrooms on Amtrak Pacific Surfliner trains. The bathrooms are pretty basic and include a toilet, toilet paper and hand sanitizer. Most bathrooms don’t have running water. As you will be using a bathroom on a moving vehicle, please use caution and hold on to a rail at all times.

Amtrak Pacific Surfliner provides snacks to satisfy your hunger during your travels. Be sure to pack a credit card and some cash in case you get hungry.

Do you have to print your Amtrak Pacific Surfliner ticket?

Amtrak Pacific Surfliner does not require a printed ticket to board the train. Instead, an eTicket is sent to you by email when you make your reservation. You can use your smartphone to show this eTicket to the ticketing agent as you board.

Does Amtrak Pacific Surfliner offer any premium features like extra legroom or movies?

Do you find yourself squished in a regular seat or just love having extra room to sprawl out? Well you’re in luck as Amtrak Pacific Surfliner offers extra legroom seating. Since there is no standard of what extra legroom is, the extra space you get may vary between train lines, but getting extra is always good.