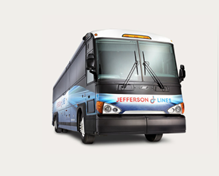 The bus was over 2 hours late and passengers were not warned of this. Passengers stood out in below freezing temperatures the whole time. Very unpleasant experience.

The bus was over 2 hours late and passengers were not warned of this. Passengers stood out in below freezing temperatures the whole time. Very unpleasant experience.

Pros: not many people on board. Cons: i wish it were a bit cheaper. Tips: n/a.

Pros: not many people on board. Cons: i wish it were a bit cheaper. Tips: n/a.

Pros: I had my own seat. Cons: Announcing where we had arrived. Tips: Arrive early to stop.

Pros: I had my own seat. Cons: Announcing where we had arrived. Tips: Arrive early to stop.

Pros: Jefferson pick-up / drop-off location in Madison is close to the Metro bus stop. Cons: No complaints on my end. Tips: Seriously consider the bus when planning a trip.

Pros: Jefferson pick-up / drop-off location in Madison is close to the Metro bus stop. Cons: No complaints on my end. Tips: Seriously consider the bus when planning a trip.

Yes, there are power points onboard Jefferson Lines buses. You can generally find one or two sockets per row of seats, so be a good traveller and check if your seat neighbour might want to charge up their devices as well. With the onboard power points, you can charge both a computer and USB devices with a power point USB converter that typically comes with most phones and tablets.

On a typical day, Jefferson Lines has 29649 scheduled bus trips in total. However, the exact departure and arrival times vary depending on the day and route. The best way to find the exact schedule for your trip is to use the search tool on this page.

Are there toilets on Jefferson Lines buses?

With 29,649 Jefferson Lines trips per day, there are a lot of great deals to uncover for the bargain hunter and Jefferson Lines tickets start at just DKK 30.67. Check out some of the latest and greatest deals snatched up by Wanderu users.