Founded in 1933, Peter Pan Bus Lines has remained a family business since its creation. It started out as a small transit company running one route between Northampton, MA and Boston, MA with a fleet of four 1933 Buick jitney vehicles, and quickly expanded over the following decades to become the leading ground travel carrier across New England, and the region’s main connection to New York City. Today, Peter Pan’s network of bus schedules features 384 routes and the company runs about 336 bus trips every day. Some of the most popular bus routes in the Peter Pan network include Boston to New York, NYC to Springfield, Baltimore to DC, and Philadelphia to Boston. Peter Pan is also the main bus travel provider between Boston and Cape Cod. 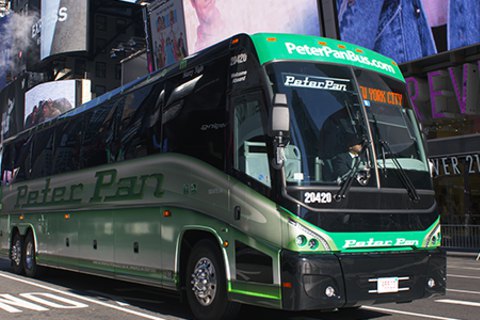 Yes, there are power outlets onboard Peter Pan Bus Lines buses. You can generally find one or two sockets per row of seats, so be a good traveller and check if your seat neighbor might want to charge up their devices as well. With the onboard power outlets, you can charge both a computer and USB devices with a USB power adapter that typically comes with most phones and tablets.

On a typical day, Peter Pan Bus Lines has 336 scheduled bus trips in total. However, the exact departure and arrival times vary depending on the day and route. The best way to find the exact schedule for your trip is to use the search tool on this page.

Are there bathrooms on Peter Pan Bus Lines buses?

Do you have to print your bus ticket?