Wanderu is an official partner of Amtrak Missouri River Runner

Amtrak Missouri River Runner is the name of the Amtrak regional passenger train connecting Kansas City and St. Louis. Formerly part of the Missouri Service train network, the Missouri River Runner was revamped by Amtrak and the new service began operation in 2009. With a total route length of 283 miles, the train takes about 5 hours and 40 minutes to travel between Kansas City and St. Louis, stopping at 10 stations in cities such as Independence, Sedalia, and Jefferson City. 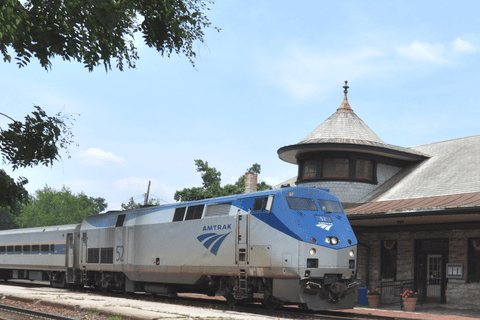 Overall review score for Amtrak Missouri River Runner
4.6
Based on 46 reviews
Ratings (Out of 5)
Comfort
4.6
Timeliness
4.5
Staff
4.7
Value
4.1
Condition
4.5
Amtrak Missouri River Runner reviews from Wanderu customers
Samuel
5.0
24 August 2020Visiting family
Pros
I was on time
Cons
N/A
Tips
N/A
Camilla
5.0
24 August 2020Solo travel
Pros
Easy travel. I had a knee replacement 5 weeks ago and train travel allowed me to get up and walk.
Cons
Delayed arrival time due to track changes. I’m used to EuroRail and the tracks are dedicated to express travel.
Tips
No ISB ports yet, bring electrical adapter for electronics. With social distancing you get a whole seat to yourself. Bring a pillow to rest on both seats.
Quinn
4.0
26 July 2020Visiting family
Pros
Courteous staff was refreshing. The prompt arrival and departure was wonderful!!
Cons
Spraying with Lysol or wiping down with sanitizer would have made it seem as though the establishment truly cared for the passengers welfare.
Tips
To be responsible for yourself and ware your masks and wipe down your area before and after seating
Antwaun
5.0
18 June 2020Solo travel
Pros
It was fun
Cons
Nothing
Tips
No
Antwaun
5.0
14 June 2020Couples trip
Pros
The site see.
Cons
Nothing
Tips
No

Yes, there are power points onboard Amtrak Missouri River Runner trains. You can generally find one or two sockets per row of seats, so be a good traveller and check if your seat neighbour might want to charge up their devices as well. With the onboard power points, you can charge both a computer and USB devices with a power point USB converter that typically comes with most phones and tablets.

Since Amtrak Missouri River Runner might sometimes use replacement train vehicles, not all trips are guaranteed to have power points. We recommend to bring a power bank to charge your phone for all trips over 2 hours, just in case.

On a typical day, Amtrak Missouri River Runner has 27 scheduled train trips in total. However, the exact departure and arrival times vary depending on the day and route. The best way to find the exact schedule for your trip is to use the search tool on this page.

No, Amtrak Missouri River Runner does not offer will call tickets. You should purchase your tickets online and make sure you have everything you need to board before you arrive at the station.

Yes, Amtrak Missouri River Runner requires you to present an ID to an agent to be allowed to board the train. Make sure you have identification issued by a government agency that meets the carrier’s requirements. Alternative IDs, such as a college ID, won’t work.

Are there toilets on Amtrak Missouri River Runner trains?

Yes, there are bathrooms on Amtrak Missouri River Runner trains. The bathrooms are pretty basic and include a toilet, toilet paper and hand sanitizer. Most bathrooms don’t have running water. As you will be using a bathroom on a moving vehicle, please use caution and hold on to a rail at all times.

Amtrak Missouri River Runner provides snacks to satisfy your hunger during your travels. Be sure to pack a credit card and some cash in case you get hungry.

Do you have to print your Amtrak Missouri River Runner ticket?

Amtrak Missouri River Runner does not require a printed ticket to board the train. Instead, an eTicket is sent to you by email when you make your reservation. You can use your smartphone to show this eTicket to the ticketing agent as you board.

Do you find yourself squished in a regular seat or just love having extra room to sprawl out? Well you’re in luck as Amtrak Missouri River Runner offers extra legroom seating. Since there is no standard of what extra legroom is, the extra space you get may vary between train lines, but getting extra is always good.