Wanderu is an official partner of Autolinee Federico

Autolinee Federico is an Italian intercity bus carrier. The company was established in 1929 and is one of the premier passenger transportation providers in the Calabria region in southern Italy, offering daily service to some of the most popular destinations in the region, including Reggio Calabria, Crotone and Siderno. Over the past several years, the carrier’s network has expanded far beyond the Calabria region and now features daily trips to 50+ destinations throughout Italy, including some of the biggest cities in the country such as Rome, Milan, Florence, and Genoa. 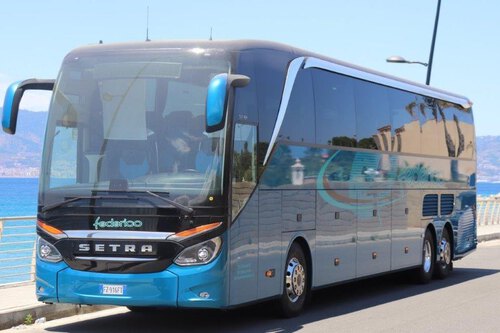 Do Autolinee Federico buses have WiFi?

No, unfortunately Autolinee Federico does not offer WiFi aboard its buses at this time. However, we find that a good book makes the time fly by and streaming services like Netflix allow you download TV shows and movies that you can then watch during your trip. Plan ahead and you will stay entertained during the entire bus ride.

Autolinee Federico does not offer power outlets on their buses at this time. We suggest you charge up your laptop ahead of time and bring a power bank for your phone to extend its battery life for the duration of the trip. And remember - a good book doesn’t require any power.

What is Autolinee Federico's schedule?

On a typical day, Autolinee Federico has 6 scheduled bus trips in total. However, the exact departure and arrival times vary depending on the day and route. The best way to find the exact schedule for your trip is to use the search tool on this page.

No, Autolinee Federico does not offer will call tickets. You should purchase your tickets online and make sure you have everything you need to board before you arrive at the station.

Yes, Autolinee Federico requires you to present an ID to an agent to be allowed to board the bus. Make sure you have identification issued by a government agency that meets the carrier’s requirements. Alternative IDs, such as a college ID, won’t work.

Are there bathrooms on Autolinee Federico buses?

Autolinee Federico does not offer meals or beverages onboard. We recommend you bring a drink and some snacks for your trip. We also suggest packing a reusable water bottle with you to reduce your impact on the environment. However, note that most buses do not allow you to bring your own alcoholic drinks.

Do you have to print your Autolinee Federico ticket?

Yes, Autolinee Federico requires that all passengers have printed tickets to board the bus. When you book with Wanderu and activate your account, you will be able to easily find and download your tickets for most buses.

Does Autolinee Federico offer any premium features like extra legroom or movies?

Autolinee Federico focuses on delivering a great travel experience at a low price and currently does not offer premium features like extra legroom or onboard entertainment. But these days, between your laptop, tablet, smartphone and e-reader, you’re the master of your own entertainment even on longer journeys.