Best Cities to Catch the Rarest Pokémon in the U.S.

After Niantic’s release of Pokémon Go in the U.S., Facebook groups and Reddit forums have been filled with questions about the best places to catch the rarest Pokémon. You don’t have to look far to find crowd-sourced maps with Magikarp flopping around the ocean, Weedle crawling through the grass, or Pidgey hanging out on every street corner. These maps are useful for certain cities, but they don’t make it easy to find rare Pokémon across the country.

At Wanderu, we want to help you complete your Pokédex and become a Pokémon Master before the next round of Pokémon are added to the game, so we reviewed photos and videos from 250 cities in the U.S. to find the home of epic, mythical and special Pokémon. We used the Twitter API to count the total number of sightings and look at the diversity of species found in each city. We hope that this helps you on your next Pokémon adventure!

Note: This list contains epic, mythical, and special Pokémon from the original Kanto region — reportedly, the only Pokémon included in the game. Based on the high frequency of Bulbasaur, Charmander, Squirtle, and Pikachu sightings, these Pokémon have been excluded from our list. 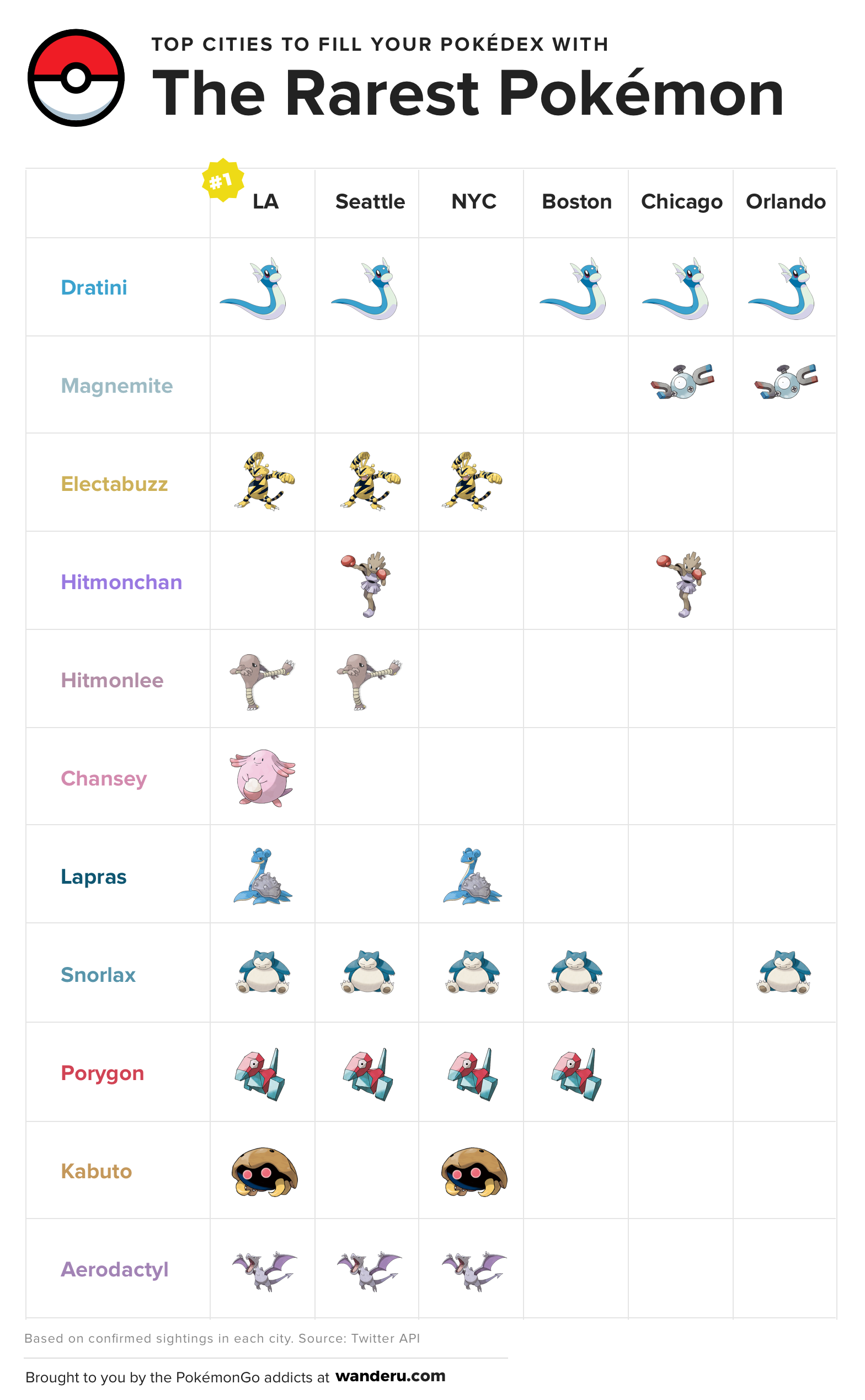 The best way to catch ‘em all is to visit the cities with the widest diversity of epic, mythical, and special Pokémon. Although all the cities included in the map have confirmed sightings, only a select few deserve the title of the best cities to catch rare Pokémon.

Coming out on top, Los Angeles has the widest diversity of Pokémon sightings, including Dratini, Electabuzz, Hitmonlee, Chansey, Lapras, Snorlax, Porygon, Kabuto, and Aerodactyl. With just two more species than Seattle, Los Angeles is the best destination for catching rare Pokémon and becoming the ultimate Pokémon Master. Take a trip from Las Vegas to Los Angeles or from San Francisco to Los Angeles to try your hand at catching these rare creatures.

This doesn’t mean you have to walk down Rodeo Drive or hike to the Hollywood sign to catch these Pokémon, since other cities like Seattle, New York City, Boston, Chicago, and Orlando also had many rare sightings. Travel along the West Coast in order to find Hitmonchan, Snorlax, Porygon, and Aerodactyl hiding near the coastline of the Pacific Northwest.

If you’d like to take your Pokémon adventure to the East Coast, then you’ll find plenty of rare Pokémon in New York City and Boston. As one of the few cities with a confirmed Electabuzz sighting, New York is perfect for catching rare electric Pokémon. Boston, on the other hand, boasts a lot of normal type Pokémon including Snorlax and Porygon. For a short adventure, travel from New York to Boston or go on a longer Pokémon journey from Chicago to New York.

Cities with the Most Rare Pokémon Sightings 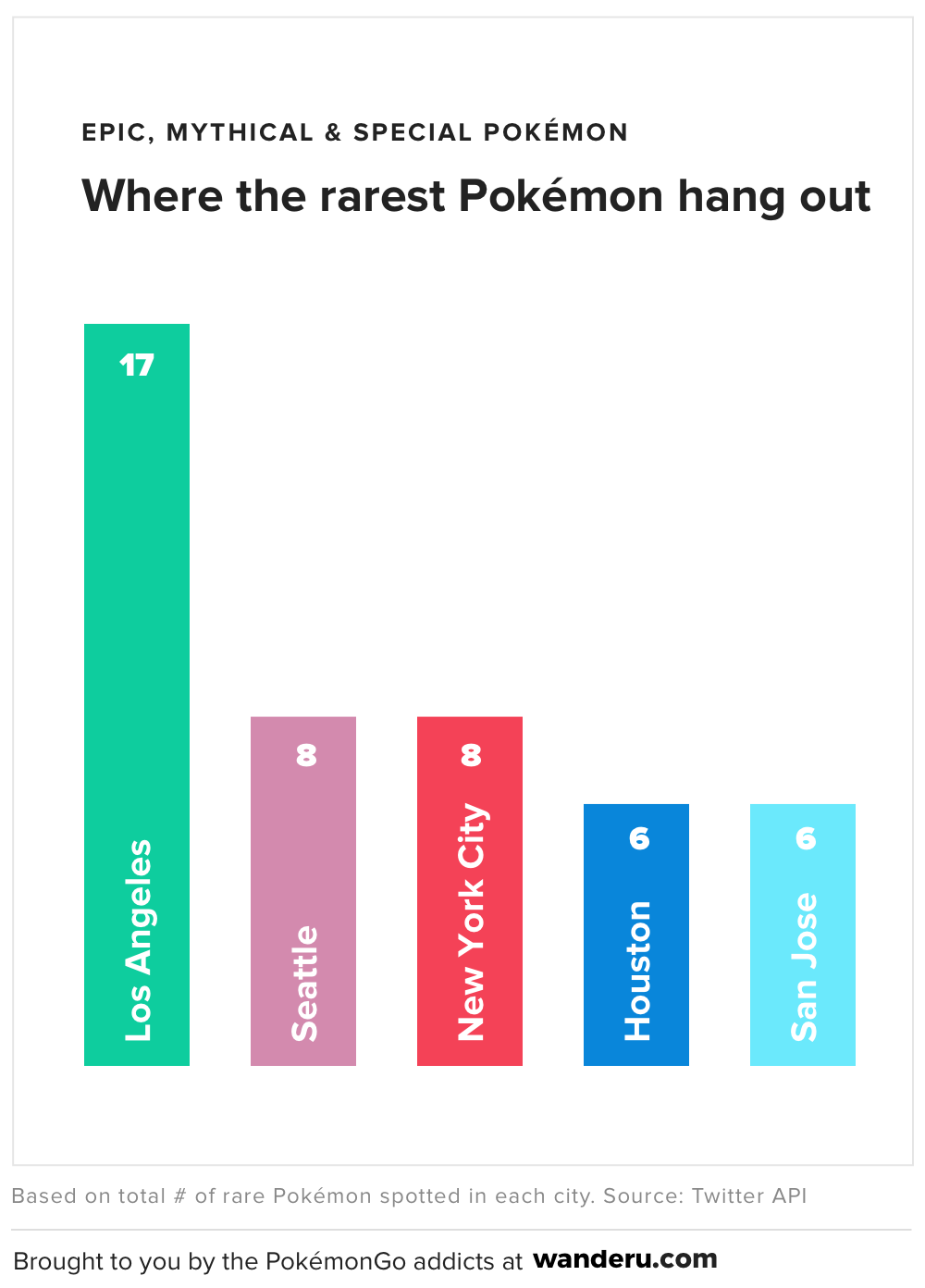 Visiting cities with a diverse group of Pokémon is one way to fill out your Pokédex, but just because one trainer found Magnemite in Chicago does not mean you’ll be so lucky. We also looked at the number of sightings in each city to find those with the largest number of rare Pokémon sightings.

Once again, Los Angeles came out on top with more than double more epic, mythical, and special Pokémon sightings than all other cities. The City of Angels found the highest number of Chansey and Snorlax than any other city. In fact, the West Coast took the cake for the total number of rare Pokémon than any other region with the help of Seattle and San Jose.

New York City represented the East Coast with several Snorlax sightings and Houston stood out for all Pokémon trainers in the South with a large number of Dratini. You can take a trip from Austin to Houston or from Dallas to Houston and capture enough Dratinis to evolve into Dragonite. Whether you live in or are traveling to one of these cities, you’re likely to find the rare Pokémon of your dreams hiding out near a park, monument, or major PokéStop. 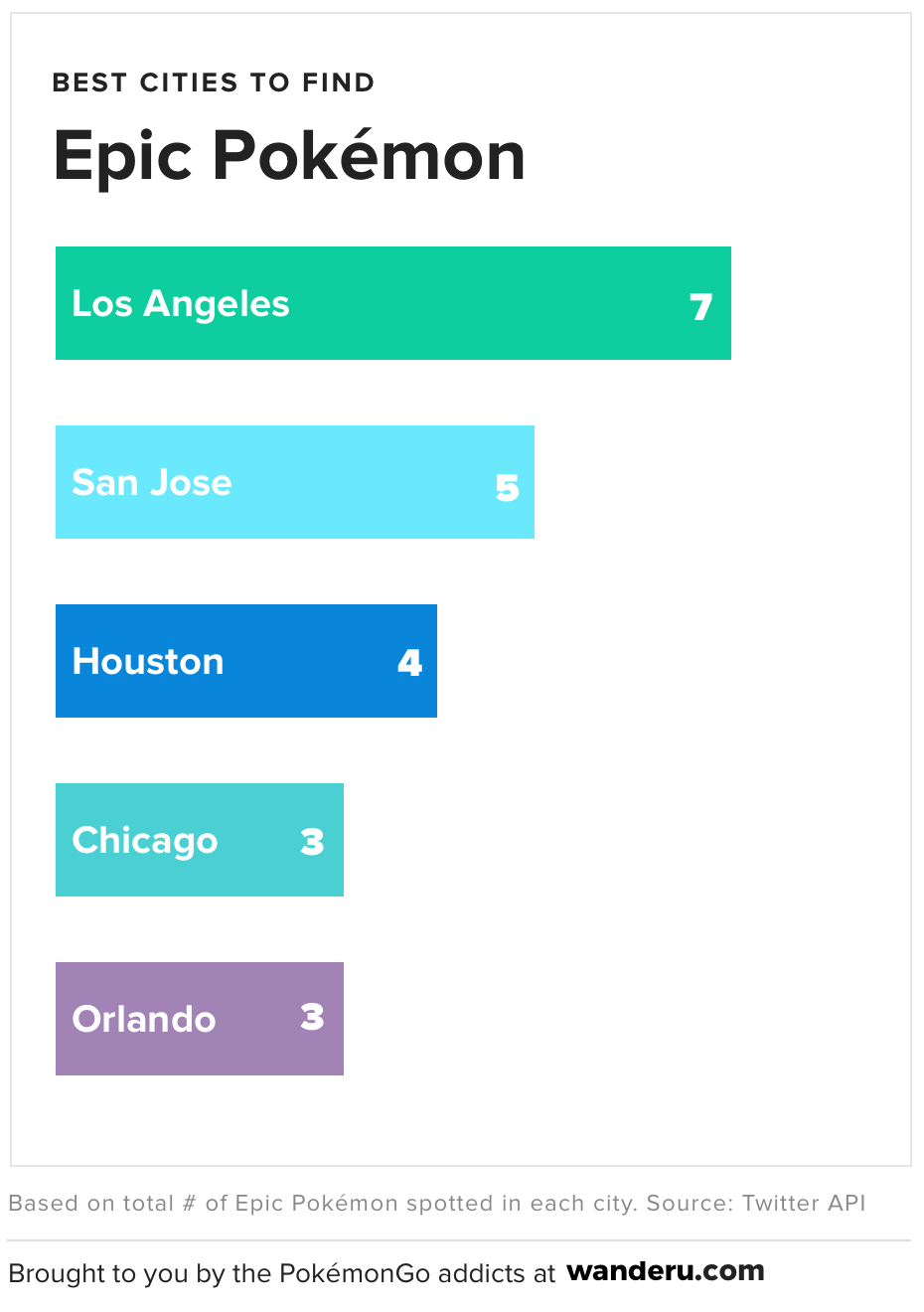 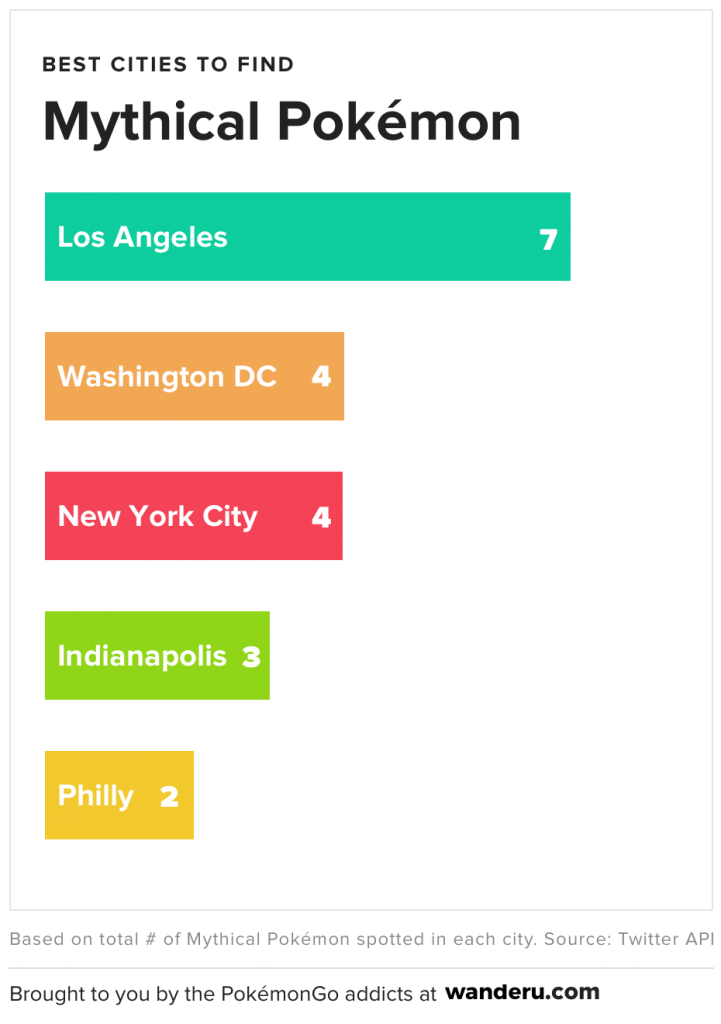 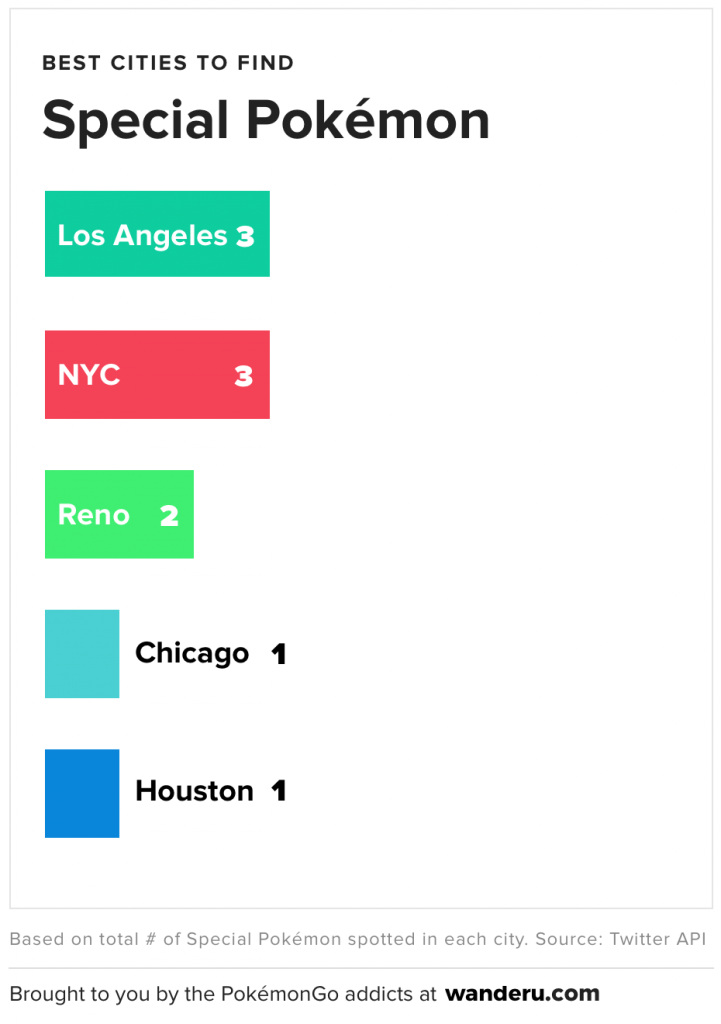 How We Found the Cities with the Rarest Pokémon

To find the best destinations for catching rare Pokémon, we looked at 250 major cities across the country. Using the Twitter API, we reviewed recent tweets including hashtags with epic, mythical, and special Pokémon names, as well as Pokémon Go. In order to find the cities with the widest diversity, we counted the number of species in each city.

To find the cities with the most Pokémon sightings, we counted the total number of epic, mythic, and special Pokémon found in each city. For accuracy, we only reviewed tweets with images or videos of Pokémon captured during game play. Totals do not include mentions of rare Pokémon without visual evidence or those hatched from eggs.

If you’re looking to be a Pokémon Master, which requires filling out your Pokédex, then you should visit the cities on the map above to find the rarest Pokémon. Pull your team together and head out to catch new Pokémon and take over the local gyms. After all, your friends will fawn over your phone when you show them your new collection of rare Pokémon!

Interested in adding to our rarest Pokémon map? Tweet us at @GoWanderu using #RarestPokemon along with a screenshot from the game and we’ll include your findings!

You are welcome to use the information and graphics on this page, crediting Wanderu. If you do so, please link back to this page, so that Pokémon trainers around the country can find the rarest Pokémon when traveling to their next destination. 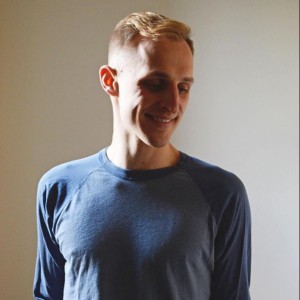 15 thoughts on “Best Cities to Catch the Rarest Pokémon in the U.S.”