Netflix & Wander: How to Watch Your Favorite Shows on the Bus Offline

Even the most avid travelers around the world would agree that, occasionally, traveling long distances can suck. We have all been there, sitting on a train riding through areas too rural for WiFi, our phones data-drenched, legs nubbed, all tired, but most importantly, bored to the core. Well, wanderers, those days are now gone! You will never ever have to experience a long journey without entertainment – if you have Netflix and a smartphone or tablet, that is.

Travelers from Seattle to Miami and from Paris to Sydney are celebrating that Netflix now allows you to watch your favorite shows and movies offline on your phone and other mobile devices – note that this feature is not available on laptop computers.

With this new service addition, you will be able to catch up on shows, anytime, anywhere, and the best part is that you won’t even touch your cellular data – we are all aware that video streaming is infamous for the amount of data it consumes in almost no time.

This is how you do it

In order to use watch Netflix offline, you will need to have the latest version of the Netflix app installed on your mobile device – and this should be running iOS 8 or later or Android 4.4.2 or later.

Titles that are available to watch offline will have a small download button in the description. FYI, not everything on Netflix is available to download but the company will continue to roll out the new feature across more and more titles.

Free up some (much needed) space

We know – phone storage is a precious commodity these days, but if you are going on a long trip and would like to get a few movies to enjoy on the road, it’s important to have enough storage space available on your device. When downloading from Netflix, you should note than an average episode of a show takes up around 180-250 MB, while a 120-minute movie can take up from 500 to 700+ MB. Of course, these will vary depending on the format that the film or show is available in — titles in Ultra HD 4K will take a lot more space than those in regular HD or SD.

This feature comes free of charge to all Netflix members. And while you won’t be able to download every single title available on Netflix, the company has made dozens of movies, documentaries and TV episodes available for download, and they announced the list will keep growing in the near future.

Enjoy it while it lasts

Netflix has also stated that the length of time users will have to watch a downloaded piece will vary by title. In some cases, the content will only be available in the “My Downloads” section for a day or two, so make sure you download your show right before you hit the road.

Another thing to remember is that you will need to delete the content you downloaded and watched offline before you try to download more shows. This is because there are licensing agreements preventing users from downloading more than a certain number of titles at the same time.

Some of the shows available at the moment include the hit thrilling drama Stranger Things, the NBC comedy classic and crowd pleaser Parks and Recreation, as well as Netflix original series Narcos, Orange is the New Black, and The Crown, among other favorites. New releases such as Gilmore Girls: A Year in the Life and Fox’s comedy New Girl, unfortunately, aren’t available for download at the moment.

Next time you are headed on a long bus or train trip, just make sure you download some of your favorite shows ahead of time and bring your tablet and phone fully charged so you can #NetflixOffline! And you don’t even have to worry about running out of battery, as most buses and trains these days have power outlets aboard to save the day!

Tips and Tricks for Taking the Bus to the Airport 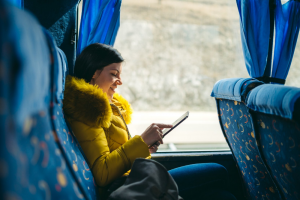 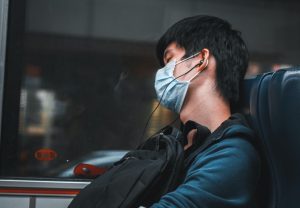 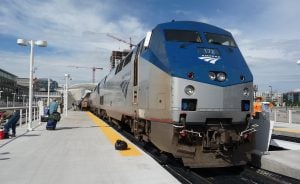