When most travelers are asked to name cities in the Netherlands, Amsterdam is top of mind. And rightfully so! The capital is packed with picturesque canals, premier museums and potent coffee houses. (And no, we’re not talking java.)

But after that? Identifying Dutch cities gets more difficult.

Luckily, we’ve got you covered. Thanks to Wanderu’s unique routing technology, we were able to map the most optimal route to visit eight scenic cities in the Netherlands for less than $100.

That’s cheaper than it currently costs to buy a 10-pound wheel of gouda on Amazonand have it shipped to your home—not even kidding. (It’s also cheaper than what it costs to buy seven grams of marijuana at a Massachusetts dispensary. Or so we’ve heard.)

This loop begins and ends in Amsterdam, which means you can spend time there at the start or end of your trip—or, hey, even pad some onto either end. (After all, those stroopwafels won’t eat themselves) .

Find a map of the complete trip below.

The best part is that these are just average prices. Which means it’s possible to do the entire thing for significantly less than $100—more money to spend on cheese (or weed), we say.

Here Are the Stops on Your Netherlands Tour

Polish your wood shoes and prepare for adventure: Holland awaits! Below, find the full itinerary broken down by each individual stop. 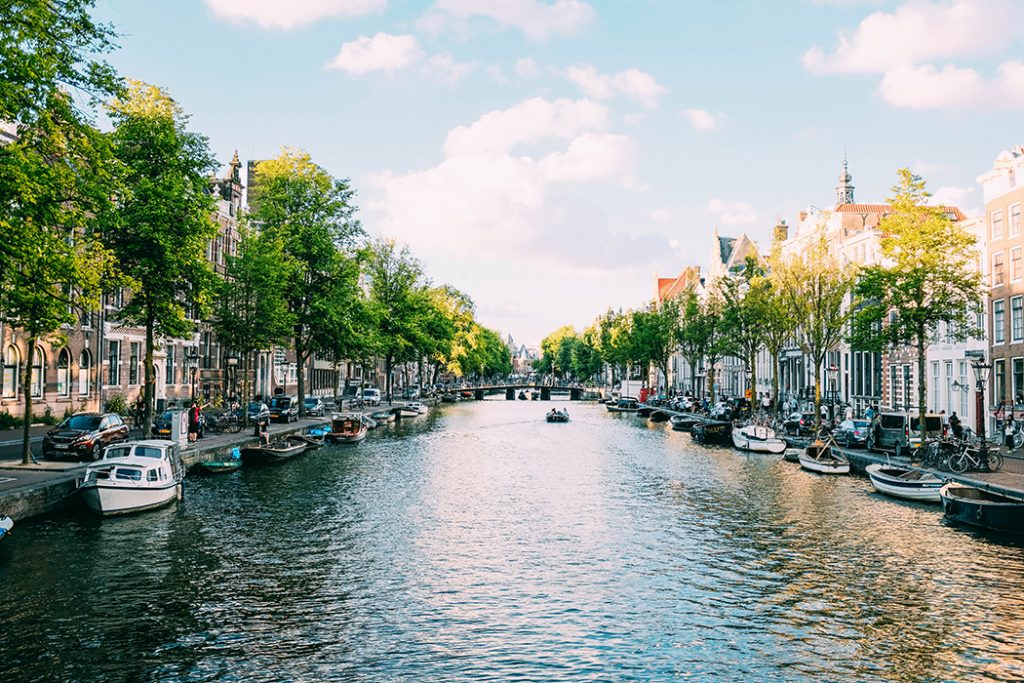 Amsterdam is a bucket-list destination, and for good reason.

As you plan your agenda, include all the things that make it one of the world’s most dynamic cities (and one of our top places to visit in Europe after graduation): The world’s largest Van Gogh collection lies in the aptly-named Van Gogh Museum, and despite the long lines, the gravitas of the Anne Frank House makes it well worth the wait.

If you’re in the mood for something more leisurely, embrace the quiet of the 14th–century Begijnhof, or float through the canals on a guided boat tour. Consider going full Dutch—not by splitting the bill, but by doing as locals do and drinking under a windmill. (Hallo, Brouwerij ‘t IJ.)

Of course, in Amsterdam, munchies are always front of mind, which is why you should try herring from a cart. (We’re partial to Stubbe’s Haring, conveniently located next to Amsterdam Centraal Station.) When it’s time to shop for souvenirs, visit theCheese Museum to stock up on gouda and edam—U.S. travelers can bring up to 10 pounds home, but check to make sure all the loot you plan to pack is pasteurized.

From there, it’s off to see everything else the Netherlands has to offer. (Which is probably a good thing for your wallet, anyhow—Amsterdam is the fourth most expensive capital in all of Europe.) 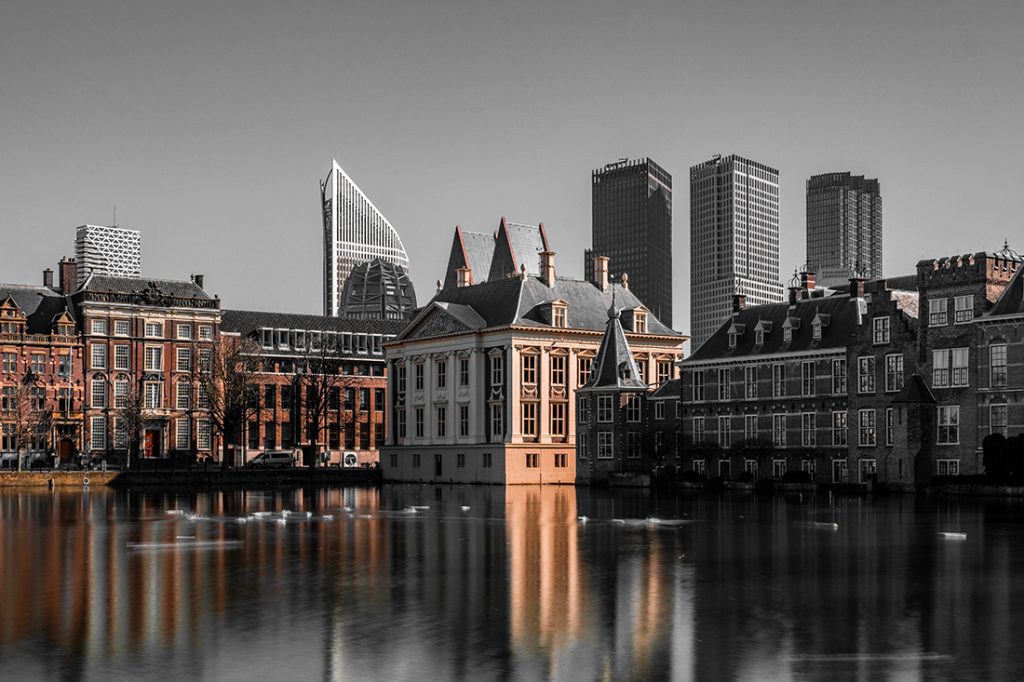 Capital of the South Holland province, The Hague is also called the “Royal City by the Sea.” It’s home to the king and queen of the Netherlands, who split their time between two of the city’s official palaces: Huis ten Bosch and Noordeinde Palace.

Among the world’s best museums for 17th- and 18th-century art, visit the Mauritshuis. Here, you’ll find such works as Girl With a Pearl Earring by Johannes Vermeer and The Goldfinch by Carel Fabritius.

Curious what it feels like to be a giant? Check out Madurodam, where you can tromp through the Netherlands in miniature—canal houses, tulip fields, cheese markets in all. (Instead of stomping the little windmills to bits Godzilla–style, however, they prefer you just take a photo.)

Wrap up your time in the Hague with a 15-minute tram ride to Delft. Known for its famed blue-and-white pottery, Delft is the perfect place to purchase a gift for your grandmother: These ceramics will look at home on her mantle next to the Hummels. 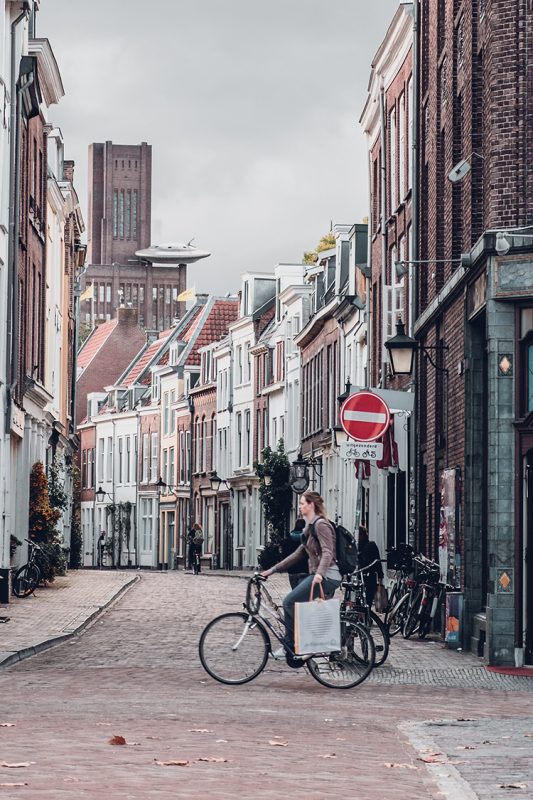 Utrecht was once the most important city in all of the Netherlands, up until Amsterdam took over in the Dutch Golden Age.

In fact, it’s been considered a city of religious importance since the 8th century. Museum Catharijneconvent showcases the fascinating history of Christianity in Holland, and has paintings by Dutch master Rembrandt.

Domtoren, the tallest bell tower in the country, is stationed in Utrecht. The 465-step hike to the top of this iconic medieval landmark will leave you feeling breathless, and if it doesn’t, the views surely will. From the pinnacle you can look out over the city in every direction, including toward the Oudegracht (old canal).

Thirteen minutes east on public transportation lies the town of Amersfoort. The birthplace of painter Piet Mondrian, this quaint village has well-maintained medieval architecture and a rich beer-brewing history. (Celebrate with some suds at breweryDe Drie Ringen, founded in 1626).

Almost all of Rotterdam’s central core was destroyed in World War II, but the city was resilient.

Today, the second-largest city in the Netherlands has an interesting mix of historic buildings and skyscrapers, making for a diverse skyline. (Witte Huis, built in 1897 as the first high-rise in Europe, still sits pretty at 10 stories tall.) The 17th-century Delfshaven neighborhood on the river Nieuwe Maas is particularly picturesque, thanks to its narrow dockhouses and tall-masted boats.

To spice up a standard walk around the city, download this free DIY scavenger hunt tour. It’ll take you to the famous cube apartments (called Blaakes Bos) designed by architect Piet Blom, along with the Markthal complex—a stunning, open-air food market under a curved shell that’s like nothing you’ve ever seen before, guaranteed. 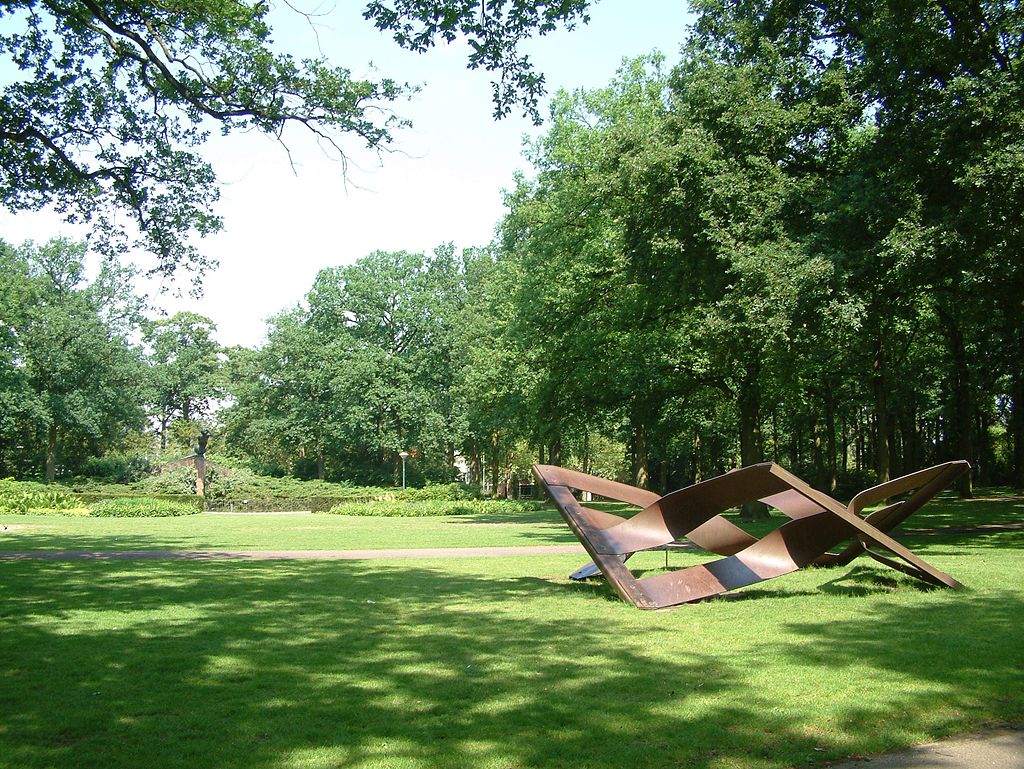 Eindhoven is the birthplace of Philips electronics, which today has more than 115,000 employees—and is, coincidentally, the number of Dutchmen it takes to screw in a lightbulb.

A hub for design geeks and tech gurus, Eindhoven is also home to the Philips Museum, where you can browse the company’s long catalog of electronic innovations. (Philips was founded in 1891.)

By this time you’ve probably seen enough work from Dutch masters to paint a windmill yourself. So take a jump forward in time at the Van Abbemuseum, which houses more than 2,700 works of modern and contemporary art, including pieces by Pablo Picasso and Wassily Kandinsky.

In Eindhoven during warmer weather? Do as the Dutch do and sprawl out at one of the city’s many parks, including the 200-acre Genneper Parken and the peaceful Stadswandelpark. 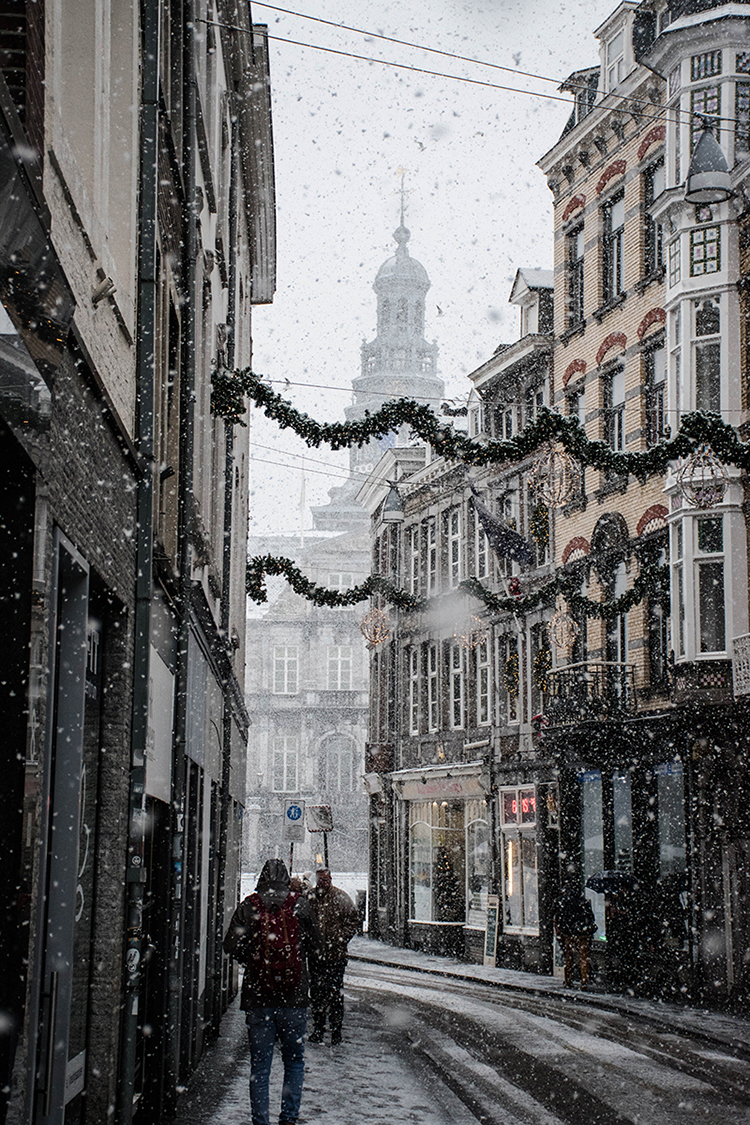 The southernmost part of the Netherlands dangles down between Germany and Belgium like a strand of melted cheese. Consequently, Maastricht—the largest city in the region—has a distinctly international feel.

The Helpoort (or Hell’s Gate) is a stone fortress that dates back to the 13th century and once held prisoners; today, it’s the oldest city gate in the country. Other Maastricht landmarks include the red-steepled Sint Janskerk, cobblestone-paved Vrijthof square, and the Kasteel Lichtenberg ruins. (Note: many of Maastricht’s attractions are open seasonally, from spring to fall.)

Among the attractions that distinguish Maastricht from other Dutch cities: its vineyards. Here, you can taste pinot noir, riesling and Müller-Thürgau at wineries like Wijngaard De Apostelhoeve and Hoeve Nekum, which sit just outside the city center and are accessible by public transportation.

In a country of old cities, this is the oldest.

A stone’s throw away from the German border (OK, more like three miles), Romans founded Nijmegen in the first century B.C. Valkhof Park, overlooking the Waal River, actually has the well-preserved ruins of a Roman castle.

Cycling is a national pastime in Holland, as Dutch as drinking beer on a terrace with a view of a canal. The Velorama bicycle museum is a terrific place to observe the history of this favored form of transportation, with dozens of old bikes out on display.

Once the history lessons are over, sit for a beer (or three) at Brouwerij de Hemel, one of the oldest breweries in the country, or take a chance on the nightlife. Clubs like NDRGRND and Malle Babbe Café are a terrific place to dance the night away.

To get to nearby Arnhem, the departure point for your next stop in Groningen, you’ll have to take a 13-minute ride on the local lightrail. Tickets only cost $5.07, and can be purchased directly from the NS website.

Welkom to the northern Netherlands!

Once a center for trade in the 13th century, today Groningen is known for its large population of students, thanks to the University of Groningen and the Hanze University of Applied Sciences.

The city center is car-free, making it among the best Dutch cities to explore on foot (or, if you’re brave enough, by bike).

Outdoor attractions are among Groningen’s primary draws. These include the renaissance-style Prinsentuin gardens, an oasis of well-manicured calm where trademark Dutch tulips bloom in the springtime. Nearby, Lauwersmeer National Park has more than 100 species of birds in its waters, forests, and grasslands.

And you can’t leave this part of the country without indulging in the local cuisine. We’re talking smoky rookworst sausage and rye bread, eaten as a sandwich or individually—we don’t discriminate.

Arriving back in Amsterdam, you’ve now visited eight essential Dutch cities in a full loop of the Netherlands. Even better – the entire trip cost less than $100!

Though it’s impossible to ever really see everything a country has to offer, we’re confident that this whirlwind tour will give you a spin through Holland’s greatest hits, from city to country to coast. To book your own tickets for this dangerously-affordable journey, go to Wanderu.com or download the Wanderu app—the best way to buy cheap bus and train tickets all across Europe.

Using Wanderu’s proprietary data on bus travel in the Netherlands—including pricing, duration and schedule information from multiple bus carriers—we leveraged our unique routing technology, which allows us to route and build multi-stop travel itineraries using trips from various providers in real time. By measuring each leg for the best balance of price and duration, we were able to find the most optimal road trip around Holland.

The prices quoted in this article are based on the average cost of bus tickets available on Wanderu for each route over a 30-day period.

To ensure that this trip is more than just data science, the Wanderu algorithm used actual bookable trips to verify that this road trip was possible at these prices over multiple consecutive days.

You are welcome to use the information and map on this page, crediting Wanderu. If you do so, please link back to this page, so that travel enthusiasts around the globe can check out all the available trips and find out how we came up with the itinerary. 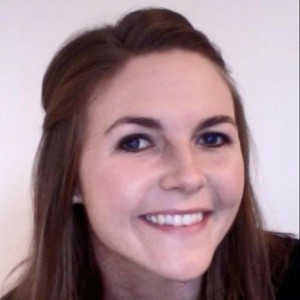 Katherine LaGrave is a New York-based writer, editor, and photographer whose work can be found in Condé Nast Traveler, Vanity Fair, Architectural Digest, The New York Times, and more.