How to Take a Loop of the Entire U.S. by Train

Going in circles is typically seen as a bad thing.

Just ask Post Malone, whose song “Circles” is about a woman who runs away from his face tattoos, but is wooed back by his velvet voice. #subtext

Going in one giant circle around the United States, though? That’s just damn cool. And while it took Phileas Fogg 80 days to go around the world, this Amtrak loop of the entire U.S. can be done in just one week.

That’s right: Here at Wanderu — where you can find buses, trains and flights all in the same search results — we crunched our own data and devised this train trip that will take you from the Northeast tip of the U.S., down the Eastern Seaboard and across the Sun Belt, up the West Coast, traversing the upper Midwest and Rust Belt back to New England. En route, you’ll have the opportunity to test seven different Amtrak services, including the iconic Coast Starlight and Empire Builder lines.

And then there’s the best news: The whole thing can be done for less than $1,000.

That’s right! The individual route prices below are just averages, so there’s a good chance you could score an even better deal than the ones listed.

Don’t believe it? We invite you to take a gander at the map and full itinerary.

And as the map suggests, some of these routes are … kind of long. We admit, you’d probably have to be a special kind of extra to ride 46 straight hours on a train. (Not that we’re judging — if you’ve got that kind of longevity then kudos!)

More likely: You want to be a little more casual in your cross-country circuit. Amtrak travel is, after all, the most comfortable and picturesque way to roam from sea to shining sea. (This loop actually comprises six of the 12 most scenic Amtrak routes, including spans of the Sunset Limited, Empire Builder and Coast Starlight.)

So, if a little bit slower is more your speed, you can break the longest stretches up into shorter segments. An overview of those abbreviated routes can be found in the individual spotlights below, along with a description of each leg. 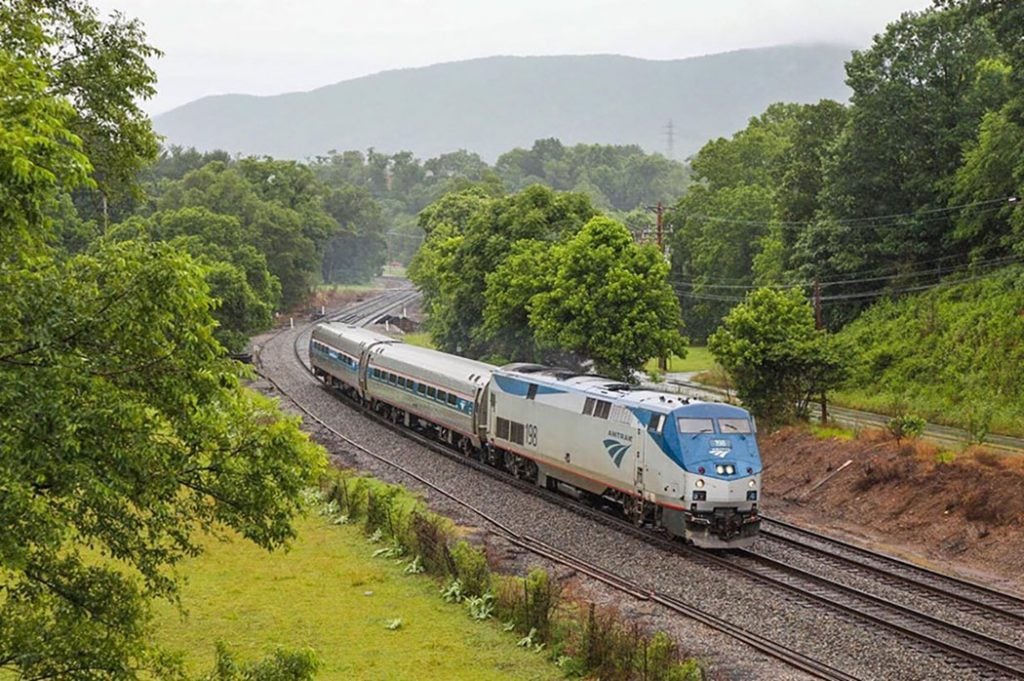 Your country-wide expedition kicks off in Massachusetts, from which you’ll cruise south through seven states (Rhode Island, Connecticut, New York, New Jersey, Pennsylvania, Delaware and Maryland) en route to the District of Columbia. Sure, you could spruce up your adventure with tickets on the luxurious Amtrak Acela, but the Northeast Regional is only 1 hour 30 minutes slower and (typically) far cheaper.

While you can push through the full 8-hour journey all at once if you’re feeling it, we recommend a pit stop in Gotham. After jumping off the train in Penn Station, a few hours of raw Manhattan energy will reinvigorate you for the next ride into the nation’s capital. 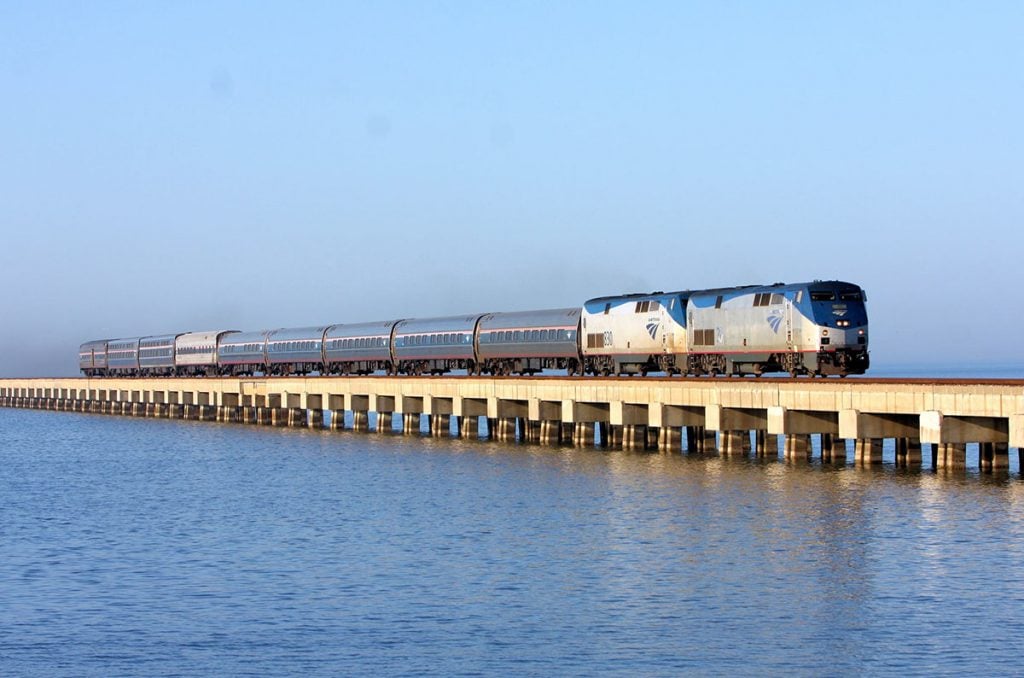 The Amtrak Crescent will swoop you southeast from D.C. toward the Big Easy. On the way, you’ll check seven more states off your bucket list: Virginia, North Carolina, South Carolina, Georgia, Alabama, Mississippi and Louisiana. From point to point, the travel time is approximately 26 hours 2 minutes. If you’d prefer to stretch your legs, we suggest a midway stop in Atlanta, which will (roughly) split the trip in half.

One thing you might notice is a Florida-sized hole in this portion of the itinerary. No, we didn’t skip The Sunshine State because of the gators. (But seriously, the teeth, the scales — they’re terrifying!) It’s because the only Amtrak line to Florida — the Silver Service — takes a different path from D.C. that hangs closer to the coast, without any way to transfer west.

So take a chill pill, Florida Man — we’re not leaving you out. Just working with the railways we’ve got. 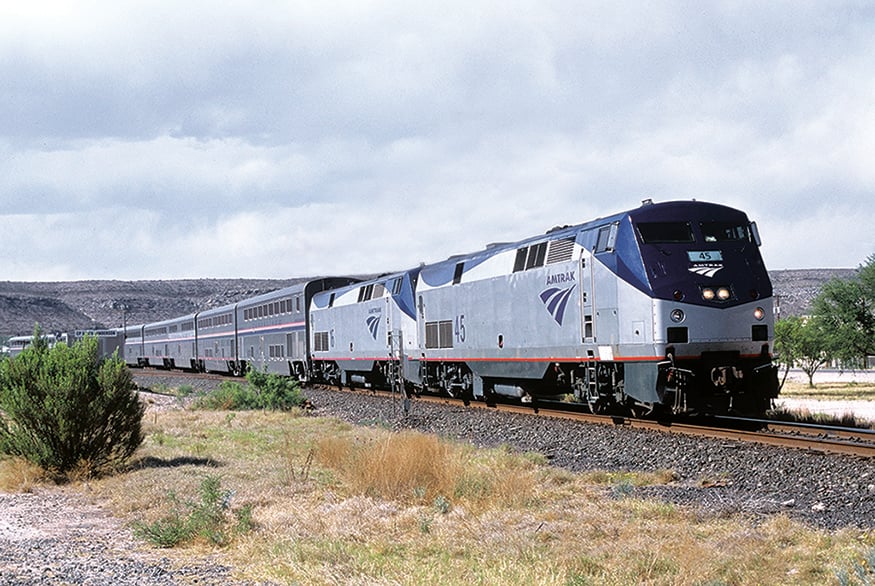 Now, for the longest leg of the loop (aka “The Yao Ming”): 1,670 miles from NOLA to L.A. on the Amtrak Sunset Limited. In sum, that amounts to 46 hours 35 minutes of straight train riding through Texas, New Mexico, Arizona and California before ending in the City of Angels.

If you’d rather divvy it up, potential pit stops include San Antonio and El Paso. Regardless, this stretch from marshy Louisiana to dry and desert-y West Texas is a window-gazer’s delight. 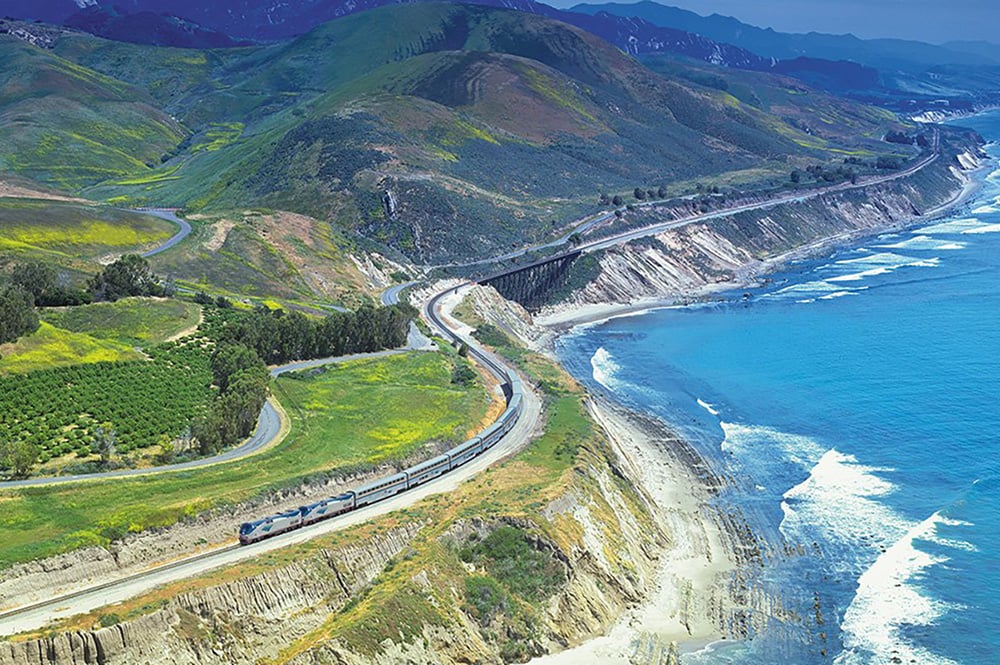 Bridging just three states (California, Oregon and Washington), the majority of this ride will be spent in the Golden State. After 29 hours on the train, you may want to do a couple laps of Gas Works Park (or visit some other free Seattle attractions) when you arrive in the Emerald City. Alternatively, proceed north at a more leisurely pace with stops in Sacramento and Portland.

Either way, we can say with confidence that the section of the Amtrak Coast Starlight that traces Highway 101 from Oxnard to San Luis Obispo is among the most gorgeous train rides you’ll ever take. Snaking along the Pacific Coast, you’ll be treated to breathtaking views for a good 150 miles — and that doesn’t even include the shoreline up near San Pablo Bay, or the foliage in Shasta-Trinity National Forest. 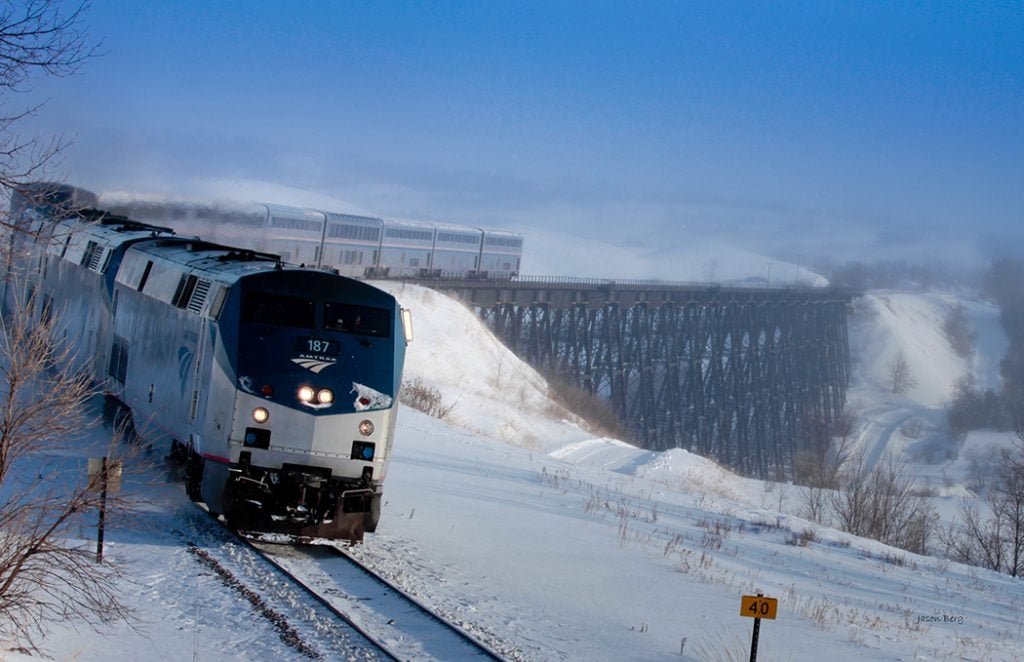 For the next 45 hours, prepare for the most rural passage of your pilgrimage. The Amtrak Empire Builder cuts through seven states, starting with Washington and the tippy-tip of Idaho. From there it goes flat across all of Montana and North Dakota, then plunges southeast through Minnesota and Wisconsin into Illinois.

Between Whitefish and Shelby you’ll be treated to portions of pristine Glacier National Park. Surrounded by mountains, much of this trip will feel almost meditative — although you can easily divide up the 1,700-mile ride with rests in Shelby and Fargo. (Though we suggest you stay away from the wood chipper.) 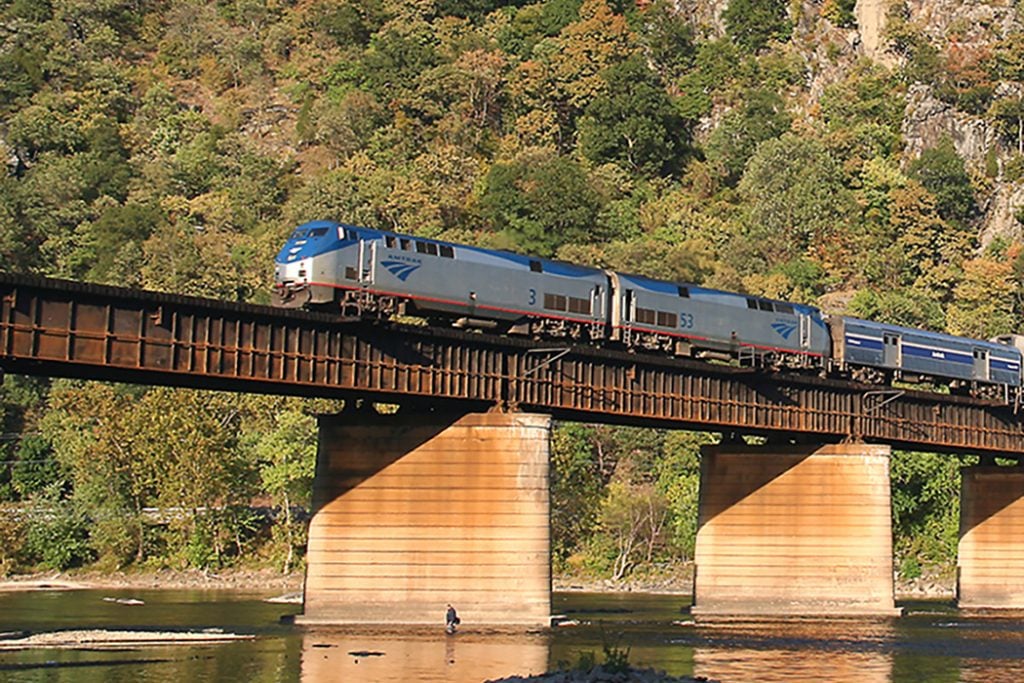 The back half of this circumferential quest is more digestible than the rest, made up of (comparatively) shorter rides. This part takes you on the Amtrak Capitol Limited from Illinois through Indiana to Ohio.

You’ll narrowly miss Michigan, but can wave to it across the Great Lakes. (Coming into Cleveland, you’ll actually take a bridge over Lake Erie.) It’s a 6 hour 5 minute ride of around 300 miles, which at this point should fly by like a 30-minute episode of “Fleabag.” 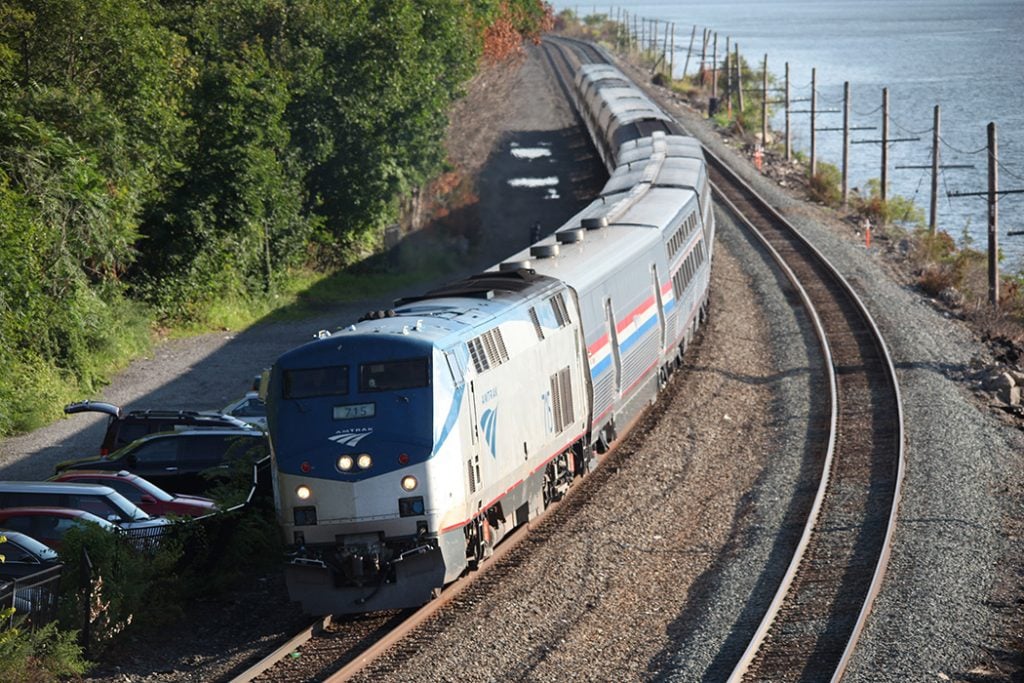 Next you’ll exit the Midwest, following Lake Erie through the corner of Pennsylvania on to Buffalo. If you so wish, take a break to see Niagara Falls before forging east toward the New York State capital city. (Actually, the Amtrak station is in Rensselaer, just across the Hudson River from Albany.)

It’s 8 hours 4 minutes on Amtrak’s Lake Shore Limited, where you’ll cruise just north of the Finger Lakes. Even so, there are stops in Rochester, Syracuse and Utica, which means if you travel in winter there’s a good chance you’ll be treated to views of that trademark Upstate New York snow accumulation. 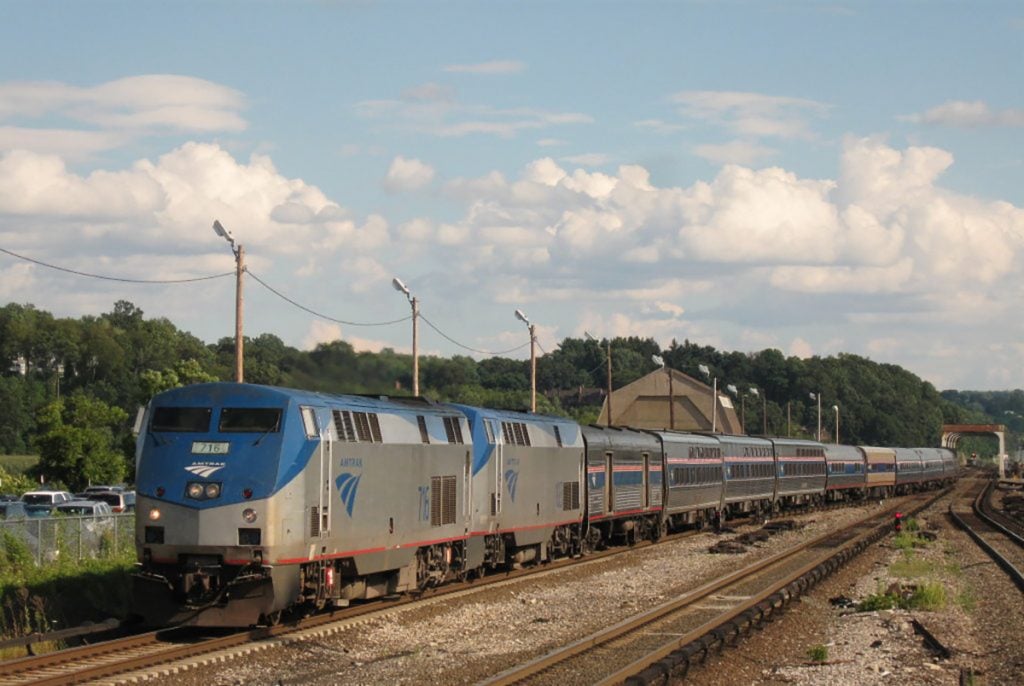 The final leg — just 4 hours 47 minutes — is still on the Lake Shore Limited. The main reason we wanted to call this out as a separate stint is so that you can properly reflect on the grandeur of your Tour de U.S.A. as it comes to a close

As you meander through the Berkshires back to Beantown, let this settle in: Over the course of this quest, you’ve passed through 27 states, ridden seven different Amtrak services, seen both the Atlantic and Pacific oceans, and traveled approximately 6,586 miles — all while on a train.

America gets flack for not having a rail network that’s as extensive as Europe’s. Maybe that criticism is fair, but this full loop of the United States proves the country is a lot more train accessible than most people probably realize.

And while it may not be the most efficient mode of transportation, that’s sort of beside the point. This loop is, quite literally, about the journey — a beautiful, comfortable journey. The entirety of which, we should remind you, costs less than $1,000 on Wanderu.

Are you prepared to take this enterprise on? Do some pre-reading with our guide on how to read your Amtrak ticket to ensure your trip happens without a hitch.

You are welcome to use the information on this page, crediting Wanderu. If you do so, please link back to this page, so that wanderers around the globe can check out all the available trips and find out how we came up with the itinerary.