Wanderu is an official partner of Amtrak Coast Starlight

The Amtrak Coast Starlight is a train line operated by Amtrak. It spans almost the entire length of the West Coast, connecting Los Angeles, California to Seattle, Washington. The Coast Starlight stops at multiple major metros along the way, including Portland, Sacramento, and the San Francisco Bay Area. In total, there are 29 cities along the route. With ticket prices ranging from $8.50 to $301.00, the Coast Starlight is a great budget-friendly way to make a quick local trip or travel up and down the coast. 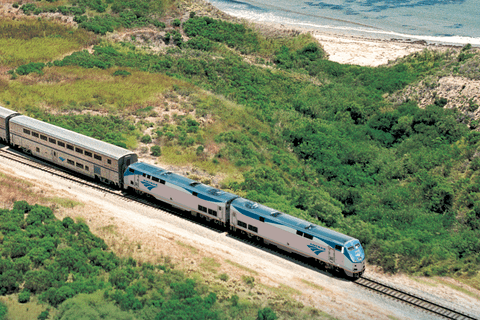 Overall review score for Amtrak Coast Starlight
4.3
Based on 123 reviews
Ratings (Out of 5)
Comfort
4.3
Timeliness
3.9
Staff
4.2
Value
3.7
Condition
4.4
Amtrak Coast Starlight reviews from Wanderu customers
LON
4.0
August 31, 2020Visiting family
Pros
Excellent attendant service.
Cons
Some section of tracks need improvement. A lot of jerky movement. Difficult to sleep. and yes, I have prior experience with train traveling. Only occasional WIFI
Donald
5.0
July 20, 2020Business
Pros
there were a lot of people but everyone was considerate, so it was a peaceful ride.
Cons
if the seats could recline a bit more.
Tips
please just stay off your phones.
Craig
5.0
July 18, 2020Visiting family
Pros
Peaceful, stress free on a train:)
Cons
More train availability, but not Wanderru's fault:). Also, wifi spotty in some areas, but again...not Wanderu's fault.
Nancy
5.0
July 8, 2020Visiting family
Pros
Both the counter personal- (Jon) & conductor (Miike) went out of theIr way to make this a pleasant trip
Cons
On time arrival
Tips
Enjoy the scenery
Donald
5.0
July 6, 2020Business
Pros
Nice and quiet.
Cons
Wifi
Tips
No

Should you take the Coast Starlight or Cascades train?

The Coast Starlight and Cascades are both passenger train lines operated by Amtrak. The main difference is that the former stretches almost the whole West Coast while the latter is limited to the Pacific Northwest. The Amtrak Coast Starlight route extends all the way from Seattle to Los Angeles, while the Amtrak Cascades train has a shorter route from Vancouver, BC to Eugene, Oregon.

The Coast Starlight has some more features that you would expect from a long distance train, such as sleeper cars. However, Amtrak Cascades tends to have more flexible schedules for certain shorter routes like Portland to Seattle. We generally recommend taking the Coast Starlight for longer trips and the Cascades for shorter trips. You can compare all their available times and prices by entering your destination and travel dates in Wanderu's search tool.

No, unfortunately Amtrak Coast Starlight does not offer WiFi aboard its trains at this time. However, we find that a good book makes the time fly by and streaming services like Netflix allow you download TV shows and movies that you can then watch during your trip. Plan ahead and you will stay entertained during the entire train ride.

Yes, there are power outlets onboard Amtrak Coast Starlight trains. You can generally find one or two sockets per row of seats, so be a good traveller and check if your seat neighbor might want to charge up their devices as well. With the onboard power outlets, you can charge both a computer and USB devices with a USB power adapter that typically comes with most phones and tablets.

Since Amtrak Coast Starlight might sometimes use replacement train vehicles, not all trips are guaranteed to have power points. We recommend to bring a power bank to charge your phone for all trips over 2 hours, just in case.

What is Amtrak Coast Starlight's schedule?

On a typical day, Amtrak Coast Starlight has 167 scheduled train trips in total. However, the exact departure and arrival times vary depending on the day and route. The best way to find the exact schedule for your trip is to use the search tool on this page.

No, Amtrak Coast Starlight does not offer will call tickets. You should purchase your tickets online and make sure you have everything you need to board before you arrive at the station.

Yes, Amtrak Coast Starlight requires you to present an ID to an agent to be allowed to board the train. Make sure you have identification issued by a government agency that meets the carrier’s requirements. Alternative IDs, such as a college ID, won’t work.

Are there bathrooms on Amtrak Coast Starlight trains?

Yes, there are bathrooms on Amtrak Coast Starlight trains. The bathrooms are pretty basic and include a toilet, toilet paper and hand sanitizer. Most bathrooms don’t have running water. As you will be using a bathroom on a moving vehicle, please use caution and hold on to a rail at all times.

Amtrak Coast Starlight provides snacks to satisfy your hunger during your travels. Be sure to pack a credit card and some cash in case you get hungry.

Do you have to print your Amtrak Coast Starlight ticket?

Amtrak Coast Starlight does not require a printed ticket to board the train. Instead, an eTicket is sent to you by email when you make your reservation. You can use your smartphone to show this eTicket to the ticketing agent as you board.

Does Amtrak Coast Starlight offer any premium features like extra legroom or movies?

Do you find yourself squished in a regular seat or just love having extra room to sprawl out? Well you’re in luck as Amtrak Coast Starlight offers extra legroom seating. Since there is no standard of what extra legroom is, the extra space you get may vary between train lines, but getting extra is always good.