Germany is famous for many things, including Oktoberfest, its football teams, and the impeccable punctuality of its transportation systems. You know what else people travel to Germany for? The castles! In fact, there are about 25,000 medieval castles spread across the country. Varying in type, size, shape, and original purpose, Germany’s castles boast a rich history and create an irresistible fairy tale setting both in the big cities and throughout the countryside.

While some castles were built for protection against invaders, and others were created to please the will of a king, they have one thing in common – they are all beautiful in their own unique way! So much so, that each year more than 25 million people from all over the world travel to Germany to see them in person.

At Wanderu, we are all about traveling to as many destinations as possible, but even we think that visiting all 25000 castles might be a bit excessive. That’s why we decided to dig up the top 20 most popular German castles on Instagram. After all, since Instagram is a visually driven platform, then the most popular castles on there must also be the most beautiful, right? That way, when you’re trying to figure out which castles belong on the must-visit bucket list of your trip across Germany, you will have a solid base to plan your trip around.

While there are castles spread throughout Germany, it appears that the majority of the most beautiful ones (or at least the ones so beautiful that people deem most Instagram-worthy) are located mainly in the southern half of the country. That’s pretty convenient because, as you will see further down, that makes it easy to see them in a single trip.

There’s no surprise that Neuschwanstein Castle tops the chart, as it is largely regarded as Germany’s most famous (and most beautiful) castle. As the prototype for Walt Disney’s Sleeping Beauty castle, it attracts millions of tourists from all ages and parts of the world on an ongoing basis.

Following it closely is another Instagram favorite, the Heidelberg Castle. Looking like something right out of Game of Thrones, this castle was built in the early 13th century and it’s considered among the most important Renaissance structures north of the Alps.

Rounding up the top three is the Zwinger palace in the city of Dresden. Originally built as part of the Dresden fortress, the palace has been refurbished as a museum complex that contains the Old Masters Picture Gallery, the Dresden Porcelain Collection, and the Royal Cabinet of Mathematical and Physical Instruments. As you can guess, the Zwinger is one of the biggest attractions for both tourists and locals alike in Dresden.

Featured prices represent the cheapest average train fares available on Wanderu for each route over a 30-day period.
Featured routes include all the destinations where the top 10 most instagrammed castles across Germany are located.

One of the easiest and most comfortable ways to travel across Germany is by train, using the extensive network of Deutsche Bahn, Germany’s premiere rail provider. Taking advantage of the train carrier’s trips available to book on Wanderu, we built an itinerary that allows you to visit the 10 most Instagrammed German castles for less than £300. Besides, what’s more romantic than taking a train ride through the beautiful German countryside to visit a number of castles that look like they were taken right out of a fairy tale?

As you can see, the trip we’ve built is looped which makes it possible to start at any one of the featured locations and travel around the country to see the most beautiful castles in person. The prices included in the table above represent the cheapest average fare for a one-way trip on a Deutsche Bahn train for each of the featured routes. That means that if you book far in advance, you might actually be able to score even lower prices and do this trip for cheaper!

The cool thing is that some of the castles in the top 10 are in very close proximity to each other, so you are able to reduce the number of stops on your trip to visit them all. For example, Neuschwanstein Castle (#1) and Hohenschwangau (#5) are both located in Schwangau which is a very short distance away from Deutsche Bahn’s stop in Füssen.

When you get to Munich, you can kill two birds with one stone because both Nymphenburg Palace (#6) and The Residenz (#8) are located there.

While this itinerary will take you to the top 10 most beautiful castles in Germany, you can easily expand your trip and visit some of the other castles in our ranking along the way. While you’re in Dresden checking out the Zwinger Palace (#3), you can also stop by the Pillnitz Castle (#18), famous for being the home of the Arts & Crafts Museum. A quick train ride away from Dresden is Meissen, a small German town that is the home to castle #20 on our list, Albrechtsburg.

Also, once you’re done taking your own Instagram shot of Heidelberg Castle (#2), you can take a short train ride from Heidelberg to Schwetzingen and check out the Schwetzinger Palace (#16).

This is What the Most Instagrammed Castles in Germany Look Like

We can’t talk about the most popular German castles on Instagram and not look at some beautiful pictures. To get you even more excited about going on this trip around Germany, take a look at some of the gorgeous locations that await you. Then let us know on Twitter which one is your favorite!

As you can see from all the gorgeous Instagram shots above, paying a visit to the most beautiful castles in Germany can be quite the mesmerizing experience. And as we have demonstrated to you, it also doesn’t have to break the bank. Just make sure to plan your trip in advance and use Wanderu to score the best deals for every trip on your journey.

If you feel like expanding your European trip, make sure you check out the itinerary we built to help you visit 15 European capitals for under £300. If you’re more of a food enthusiast, we also uncovered the best under-the-radar places in Europe you should add to your travel list to satisfy that foodie wanderlust.

When you hit the road, remember to tag us in your photos on Facebook, Twitter & Instagram, so we can travel to these breathtaking destinations along with you.

You are welcome to use the information and graphics on this page, crediting Wanderu. If you do so, please link back to this page, so that travelers around the world can see all the data and find out how we came up with the ranking and itinerary. 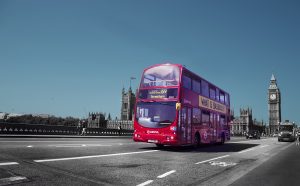 How to Visit 15 European Capitals for Less Than £300