On average, concert tickets in Portugal can be up to 40% cheaper than tickets in Austria.

A few weeks ago, we conducted a study to find out whether prices of concert tickets are different across all major cities in the U.S. It turned out that, depending on your location, you could be paying up to 75% more (or less) for the same concert. Since there was such a huge difference within just one country, we became very curious to see if that was also the case across Europe.

Determined to find the cities with the cheapest and most expensive concert tickets in Europe, we analyzed the price points for 14 large-scale arena tours that took place in 2017 or are scheduled to occur in 2018. Those included tours by global music superstars such as Lady Gaga, Katy Perry, Shakira, Kendrick Lamar, Sam Smith, and Shania Twain, among others.

As a result, we discovered that Vienna, the capital of Austria, is the city with the most expensive concert tickets in Europe, while the citizens of Portugal’s capital, Lisbon, enjoy the cheapest concert tickets on the Old Continent. In fact, tickets in Lisbon are, on average, up to 40% cheaper.

Here’s the breakdown for the rest of the continent:

The amounts quoted in the graphic above show how much, on average, you’d have to spend on a top-price general admission concert ticket in each city if a ticket for the same concert costs €100 in London. In other words, if a concert ticket in London is €100, you will pay around €110 for the same show in Munich and around €84 in Barcelona.

Vienna takes the top spot as the city with the most expensive concert tickets in Europe. It is followed closely by Germany’s Munich and Hamburg, as well as Swtizerland’s Zurich. This is quite an interesting discovery, given the fact that the average cost of living in Vienna is far below all three of the other cities.

At the same time, Amsterdam, a city that is considered among the most expensive to live in Europe, is one of the top 3 destinations if you’re looking to save on concert tickets. So, next time you need to travel to see your favorite artist or band perform, book a cheap bus ticket to Amsterdam and save on everything! The rest of the “cheap trio” is complemented by Spain’s capital, Madrid, and Portugal’s capital, Lisbon. Those lucky Iberians!

Surprisingly, Paris is not just the City of Love, it’s also the city of relatively cheap concert tickets. At #16, the French capital offers more affordable concert-going experiences than most of the cities on the chart, giving you a chance to combine an always-needed trip to Paris with seeing your favorite artist live without breaking the bank.

One thing that really stands out when you look at the chart is the lack of cities in Eastern Europe. The reason for that is the fact that very few large-arena tours visit that part of the continent. Out of the 14 tours that we analyzed, only one had stops there. As a result, there wasn’t enough available data to include Eastern European cities in this report. 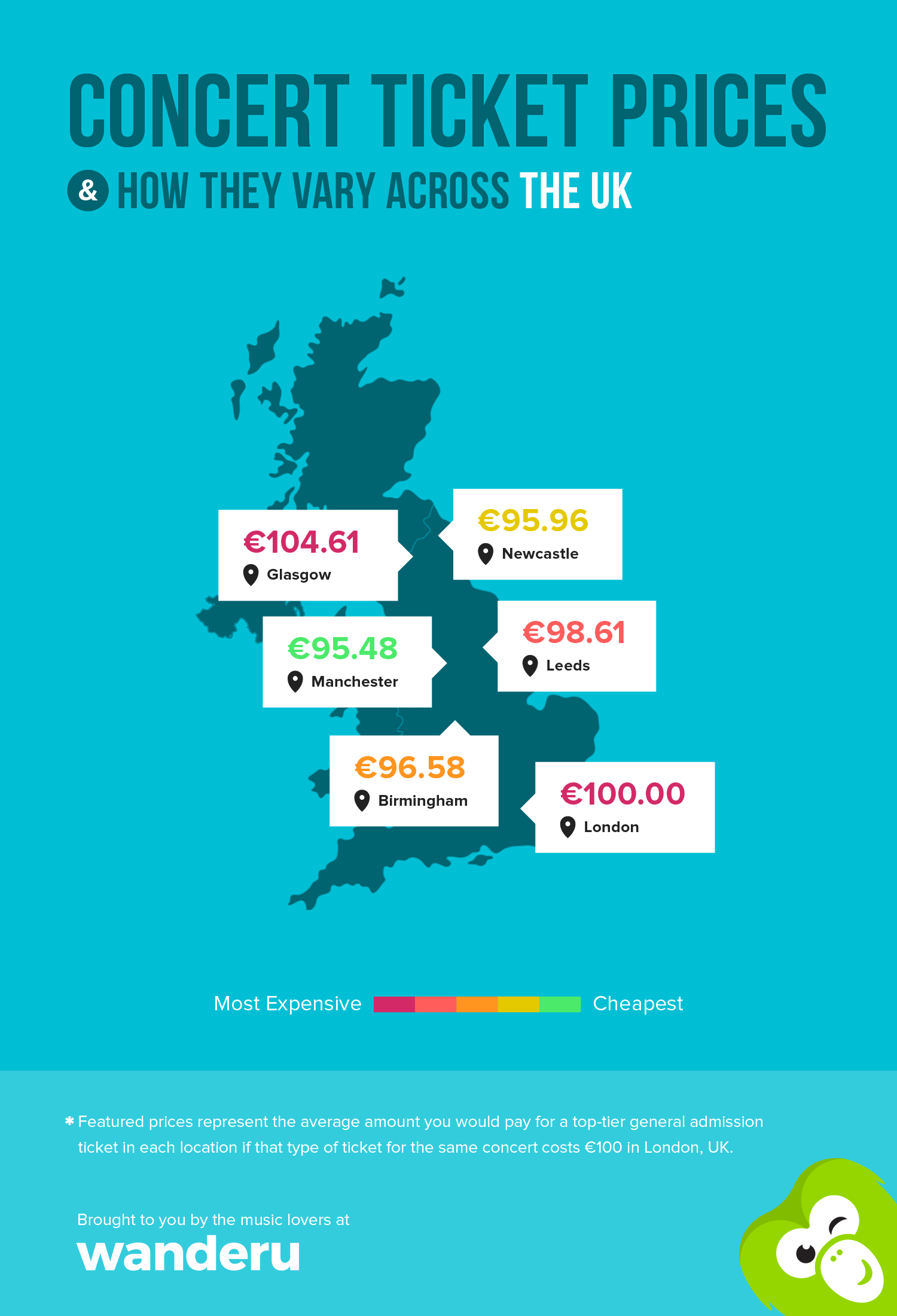 *Featured prices represent the average amount you would pay for a top-tier general admission ticket in each location if that type of ticket for the same concert costs €100 in London.

The first thing that stands out when you look at the UK chart is London’s unexpected second place. Though it’s one of the most expensive cities in the world, and a preferred entertainment destination for millions of travelers, the British capital concedes the top spot to Scotland’s Glasgow where a concert ticket will cost you roughly 4% more.

While British cities don’t differ too much when it comes to the cost of a concert ticket, Manchester is the one that can proudly wear the title of city with the cheapest concert tickets in the country. Therefore, if you don’t live in any of the six places on the chart and are trying to decide where to go for that concert you wanna attend, book your cheap coach tickets to Manchester and rest assured that you’ve made the best decision. 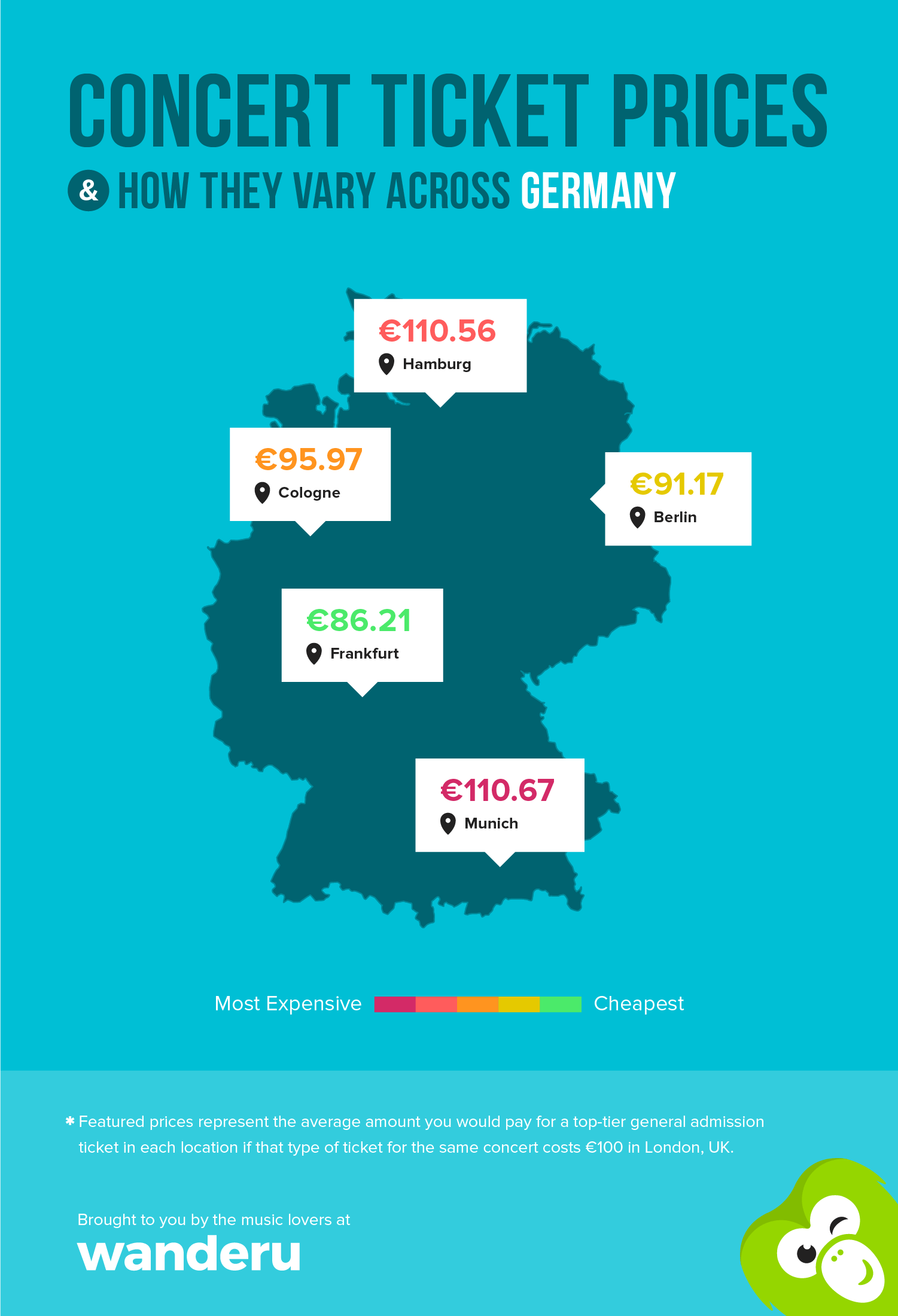 *Featured prices represent the average amount you would pay for a top-tier general admission ticket in each location if that type of ticket for the same concert costs €100 in London.

Unlike British cities, Germany’s most popular tour destinations range widely when it comes to the price of concert tickets. Munich and Hamburg essentially share the top spot, as the average concert tickets prices in both cities far exceed the average amount you’d pay for the same concert in any of the other featured German towns.

Surprisingly, Berlin didn’t end up as the destination offering the cheapest concerts. Even though the German capital is famous for being relatively affordable compared to other major cities in Western Europe, it is Frankfurt that comes out as the best destination for concert-goers on a budget. And affordable it is! As it turns out, by going to a concert in Frankfurt instead of Munich or Hamburg, you can save up to 30%!

While all this might seem unfair (especially if you live in Vienna), there are various factors that influence the final price of a ticket. Those include venue fees, accommodation costs, purchasing power of the region, and overall public interest, among other things.

If you’re in Europe and don’t live in any of the cities included in our chart, it’s safe to say that you’ve had to travel to see your favorite artist or band perform live. Fortunately, you are now armed with all the information you need to make the best decision on your next concert-going adventure.

Of course, you also need the best way to get where you need to go. We can help you out with that too! Just visit Wanderu.com or download the free Wanderu app and you can easily book a really cheap bus or train trip to get you to your concert destination of choice. We always have the best available travel deals, so when you couple that with going to the place with the cheapest concert tickets, you know that you’re winning at life!

You are welcome to use the information and graphics on this page, crediting Wanderu. If you do so, please link back to this page, so that music lovers around the world can see all the data and find out how we came up with the ranking.