15 Free Things You Can Do in Boston

Since its founding in the 1600s, Boston has been among the nation’s most prominent American cities. A few movies have even been set there. (Have you heard of a little film called Ted 2?)

Boston and its greater surroundings were the site of many famous Revolutionary War battles (Bunker Hill, Lexington and Concord), and where Paul Revere made his famous “The British are coming!” midnight ride.

Over the years, Beantown has grown into an important hub of history, education and even technology. (In fact, “The Hub” is actually another Boston nickname.) With an influx of startups and corporations settling in the city, it’s quickly becoming the San Francisco of the East Coast, and is even ranked among the country’s top party cities.

That said, it’s also one of the most expensive spots in the United States. Groceries are more than 20 percent higher than the national average, and a pint of craft beer costs more than $7. Thankfully, travel to Boston won’t drain your bank account. On Wanderu, you can find ridiculously cheap bus, train and plane tickets to get you to The Town of Tom Brady™️ from places like New York City, Philadelphia and Washington, D.C.

To help you save even more on your trip to Boston, we’ve compiled this list of free attractions and activities. Stroll past historic landmarks, learn how to brew beer, or gaze up at the stars: Whatever way you take Boston, with the places on this list you won’t have to pay a dollar. Simply click a subject below to jump ahead.

Otherwise, scroll down and view the guide in its entirety. 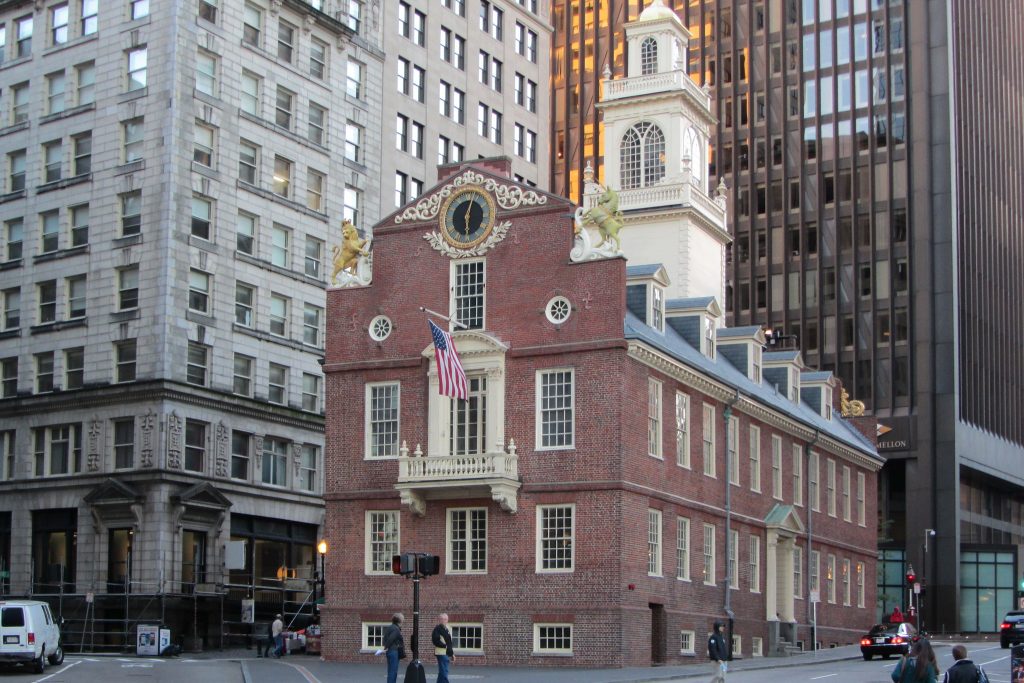 WHY YOU SHOULD VISIT: The trail was dedicated in 1951 and attracts more than 4 million visitors a year. Sixteen stops are included along the 2.5-mile path, including museums, churches and parks that tell more than 250 years of Bostonian history (much of it Revolutionary War era).

You can walk the trail at your leisure, or join one of the tours offered daily. They last about 90 minutes and depart from the Boston Common Visitor Information Center.

WHY YOU SHOULD VISIT: This 1.5-mile trail takes you around the North Slope of the Beacon Hill neighborhood and gives you a look at the life of the African American community in 19th century Boston. Learn about the Underground Railroad and abolition movement as you walk along the largest collection of historic sites detailing the free Black community prior to the Civil War. National Park Rangers lead tours during the spring and summer departing from the Museum of African American History, located in the former Abiel Smith School.

WHY YOU SHOULD VISIT: This trail showcases 20 landmarks of the Irish-American community throughout downtown Boston and Back Bay. The Boston Irish Tourism Association sometimes offers tours beginning at the Boston Common Visitor Information Center, and while tickets for the guided version cost $15 for adults, the group also encourages visitors to follow the 3-mile trail on their own.

WHY YOU SHOULD VISIT: Founded in 1791, the country’s first historical society holds the papers of John Adams, John Quincy Adams and Thomas Jefferson. It also includes Paul Revere’s own account of his famous ride, as well as a letter from Abigail Adams to her husband advocating for women to be involved in the founding of the U.S. The building includes rotating exhibitions. Free tours of the library are available throughout the year. 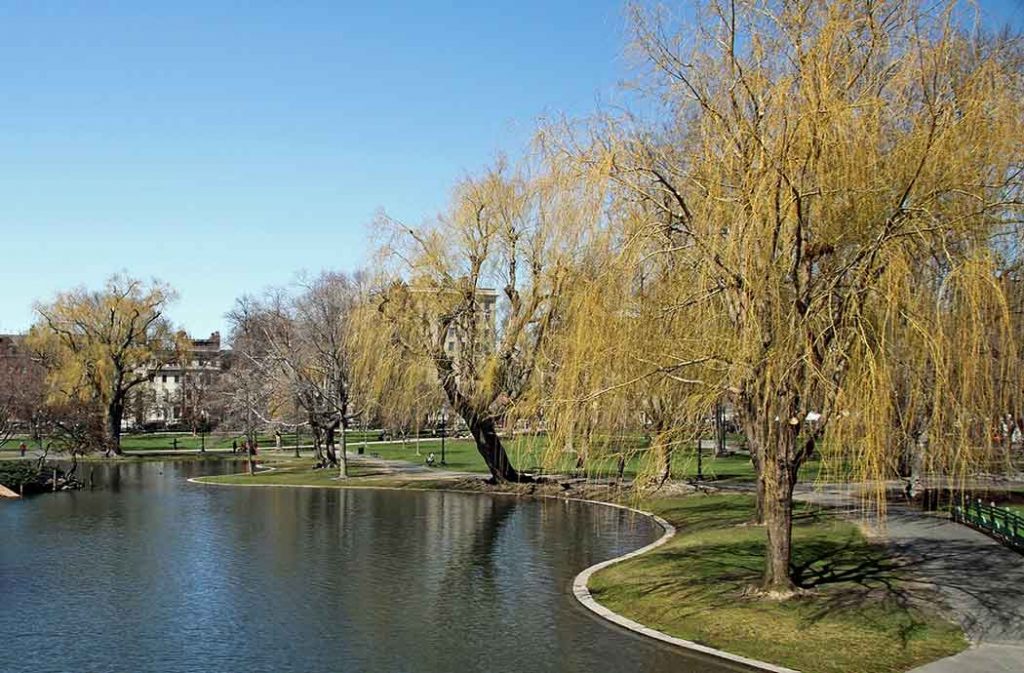 WHY YOU SHOULD VISIT: Founded in 1634, Boston Common is the oldest park in the country. It has been a gathering spot throughout the city’s history, holding everything from a British encampment during the Revolutionary War, to anti-Vietnam War rallies and civil rights rallies in the 20th Century. The tree-lined park includes greenspaces and a pond used for ice skating in the winter, if you want to show off your pirouettes.

WHY YOU SHOULD VISIT: Not actually an island but a peninsula, Castle Island is only 15 minutes from downtown Boston. Built in the 1600s, Fort Independence is situated there, with free tours available on weekends from May until October. The green space surrounding the park is a pleasant spot for a stroll, or you can enjoy one of the Pleasure Bay’s beaches. 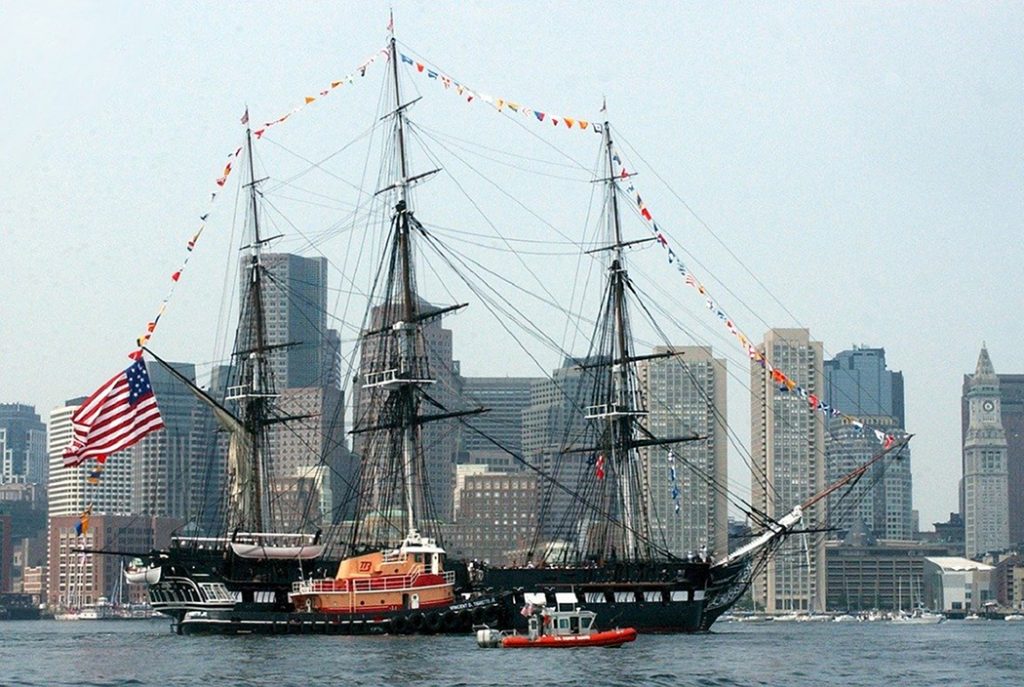 WHY YOU SHOULD VISIT: Located along the Freedom Trail, the U.S.S. Constitution and its neighboring museum commemorate the world’s oldest commissioned warship still afloat. In fact, the vessel was named by George Washington himself. Visitors to “Old Ironsides” can speak with active duty U.S. Navy sailors assigned to the ship, which is free to visit. (Anyone 18 and older must show a government ID.) Closing time in the spring and fall varies to allow for the firing of a gun when the American flag is lowered at sunset. The museum has a suggested donation.

WHY YOU SHOULD VISIT: This monument commemorates the 1775 Battle of Bunker Hill between New England soldiers and the British Army — one of the Revolutionary War’s first major battles. The 221-foot granite obelisk took more than 17 years to build. Visitors can climb the monument for a view of the city, and stop at the small museum nearby, which is also free. 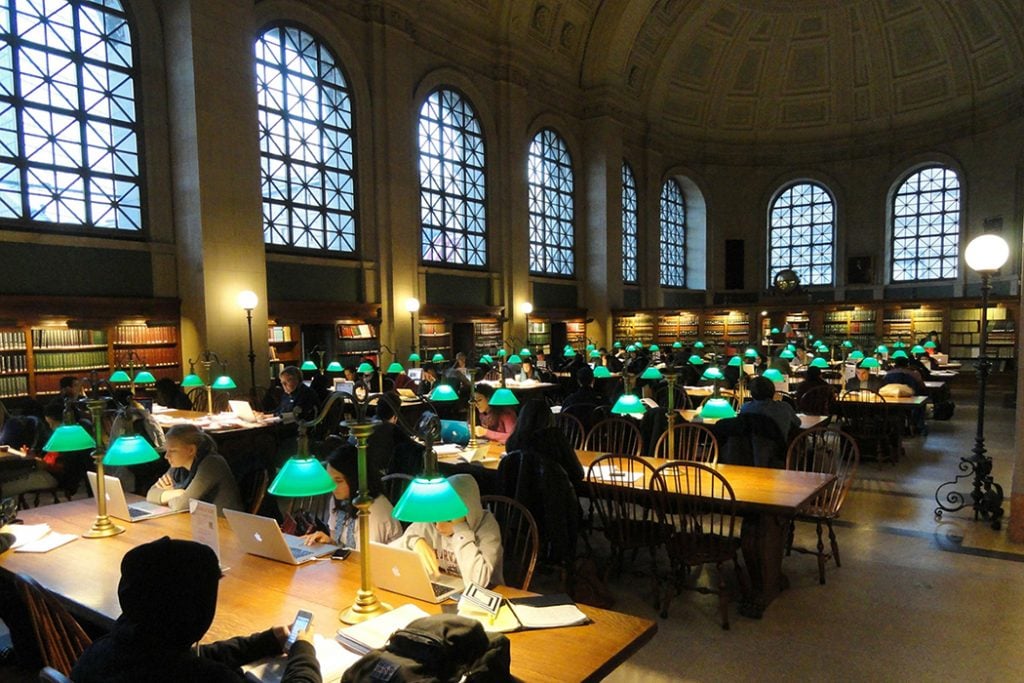 WHY YOU SHOULD VISIT: The main branch of the BPL offers free tours of the building’s art and architecture. They last about an hour and take place every day of the week. That said, you can also just wander the impressive premises yourself: Bates Hall, which we highly recommend for a day of studying or working remotely, looks like it was pulled right from the pages of a Harry Potter novel.

WHY YOU SHOULD VISIT: Located across from Boston Common, the state’s capitol building includes a cornerstone laid by Samuel Adams in 1795 and a dome coppered by Paul Revere in 1802. Free tours are offered of the building and its collections: They last about 45 minutes and take place between 10:00 a.m. and 3:30 p.m. Reservations are required.

WHY YOU SHOULD VISIT: The Boston Fire Department is one of the oldest in the nation, and the museum celebrating its legacy is straight 🔥. Housed in an old brick firehouse (of course), the Boston Fire Museum allows you to take an up-close look at fire alarm displays and antique firefighting equipment, including buckets from the 1700s. Admission is free, but donations are appreciated. 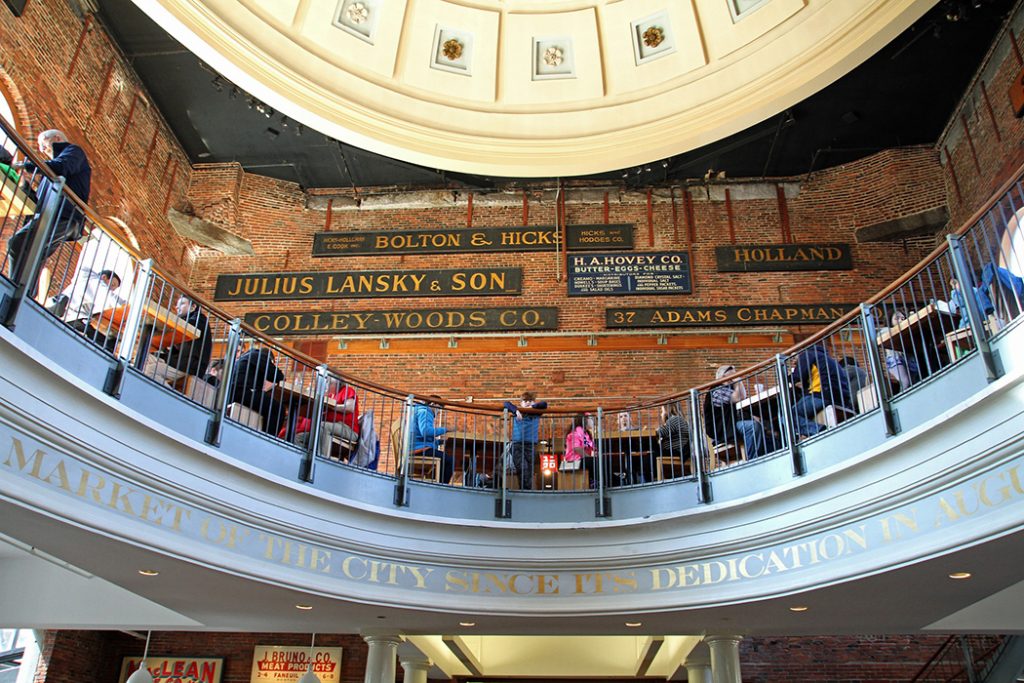 WHY YOU SHOULD VISIT: Also a stop along the Freedom Trail, the Marketplace is adjacent to historic Faneuil Hall, which has been a meeting place since the 1700s — Founder Fathers called it “The Cradle of Liberty.” (Assuming “Hamilton” is 100-percent accurate, they probably even wrote a rap about it.) The hall contains dozens of eateries and retailers, including the world-famous Quincy Market Colonnade. Its prime location downtown makes it a great jumping-off point for sightseeing, or a place to rest and get a bite to eat.

WHY YOU SHOULD VISIT: Learn about the beer brewing process at the company named after one of the signatories of the Declaration of Independence. (Adams was, in fact, a professional brewer — although legend has it not a very good one.)

Classic tours are free, but have a suggested donation of $2 that is given to local charities. They run 11:00 a.m. to 5:00 p.m. every day except Sunday. Tours start about every 40 minutes and last roughly an hour. They include three beer samples and a complimentary tasting glass for guests over 21. 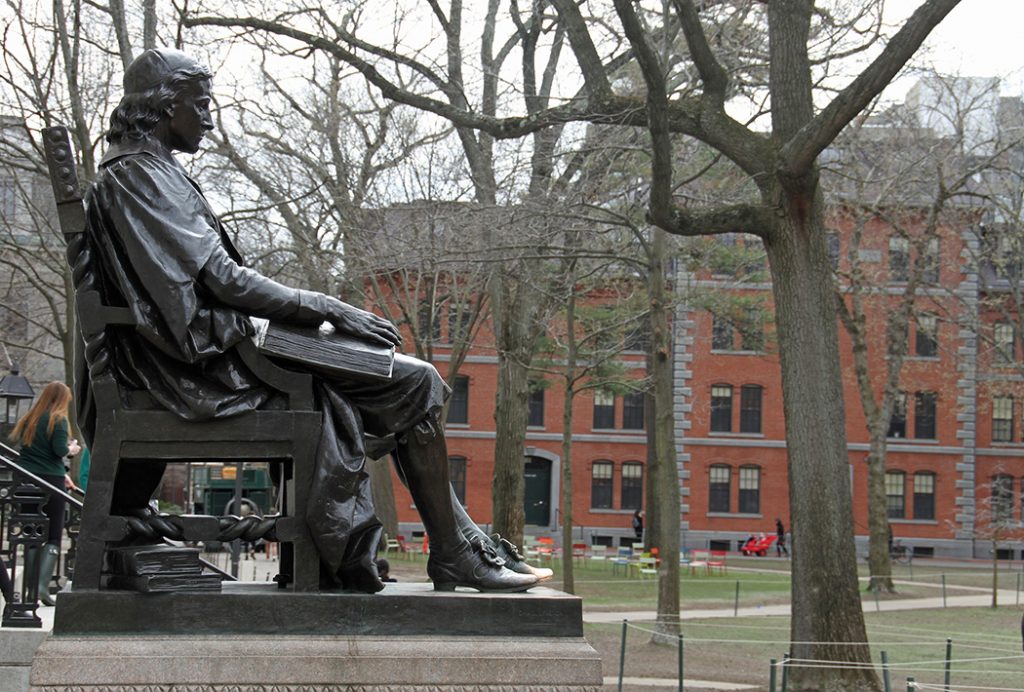 WHY YOU SHOULD VISIT: If The Social Network left you hungry for more, see what it’s like to be a student at the elite Ivy League institute. The student-led tours depart from the Harvard University Visitor Center in the Smith Campus Center. Tours last about an hour and are completely free. You can also ditch the group and go on a self-guided tour for the same price — nada.

WHY YOU SHOULD VISIT: Boston University’s Department of Astronomy offers open nights for the public most Wednesday evenings throughout the year. Tickets are required, and go “on sale” at 11:00 a.m. on the prior Thursday. Keep in mind that the event is weather contingent, and will be canceled if there’s rain, haze or clouds. Visitors can call ahead or check the observatory’s Twitter for updates.

As you can see, planning a trip to Boston doesn’t have to swallow your budget like the Boston Harbor swallowed all that tea. These free activities will let you explore the city’s history, nature and more while saving your dough for more important purchases. (Bottle service? Assless chaps? We don’t judge.) Just remember to book your trip with Wanderu, where you can compare cheap buses, trains and flights all in the same search.

Once you’ve had enough of Beantown, you can keep exploring on a budget because there are 27 destinations where you can travel from Boston for less than $20. In fact, you can even snag $1 deals to four of those, including New York City.

And if you want to extend your vacation even further, consider making it the initial stop on this epic Alexander Hamilton-themed tour, which takes you all the way down the East Coast. Once you’re in the capital, you can even use our guide to “22 Museums & More You Can Visit for Free in Washington, D.C.” 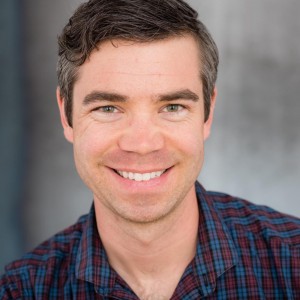 Peter Jones has a background in journalism and international relations. He loves comedy, running and travel. One time, he offered the queen of Jordan a peanut butter and jelly sandwich.