Megabus is an intercity bus company which began operating in North America in 2006, after the success of its counterpart, Megabus Europe. Originally providing bus service on routes in the Midwest between cities like Chicago, Indianapolis, and Detroit, Megabus has expanded its network of bus routes to include over a dozen cities across the United States and Canada. Some of Megabus' top routes include Washington, DC to New York City, New York City to Philadelphia, Richmond to Atlanta, and Milwaukee to Chicago.

Megabus is known for its famous $1 ticket deals, as well as its double decker buses with panoramic windows offering some extra scenic views on your travels. Buses are also equipped with air conditioning, onboard restrooms, power outlets, and access to free WiFi. Plus, you can feel good about the green certification of Megabus vehicles.

Megabus is an excellent choice for affordable, dependable, and comfortable travel, whether on a long journey or a quick trip.

Pros: They got me to Washington, DC safely. Cons: The driver was sneezing a lot, which made me nervous because of COVID-19. The electricity did not work on the lower level, I was unable to use the light above my seat, nor was I able to charge my cell phone during the t...

Pros: They got me to Washington, DC safely. Cons: The driver was sneezing a lot, which made me nervous because of COVID-19. The electricity did not work on the lower level, I was unable to use the light above my seat, nor was I able to charge my cell phone during the trip. Tips: NA.

The bus from Philadelphia to Baltimore is Megabus’s most popular route. Trips from Washington to Richmond and Washington to New York are also highly popular.

How do you get a $1 Megabus ticket?

Megabus is famous for its $1 tickets; occasionally, there are even free trips. It is true that all Megabus tickets start at $1, but there is a very limited number of these low priced tickets for each trip. Basically it works on a first come, first served basis. The only way to guarantee a $1 fare is to be the first customer to purchase a ticket for your trip. Therefore, you should plan on booking as early as possible.

For more details, check out our full guide on Megabus discounts and promos.

How many bags can you bring on the bus?

Megabus luggage policy states that each passenger is allowed one piece of luggage and one carry-on bag. The luggage must weigh less than 50 pounds and must be under 62 inches in dimension when its length, width, and height are added together. The carry-on item must be small enough to fit in either the overhead compartment or under the seat in front of you.

Do Megabus buses have WiFi?

Yes, Megabus offers WiFi on their buses. Although most trips with Megabus will have WiFi as advertised, some buses might not come equipped with WiFi and onboard WiFi can lose its connection in rural areas. We recommend you bring a book or download a movie just to play it safe. Megabus WiFi is generally best used for surfing the web, checking emails and chatting with friends; you shouldn’t count on the WiFi to binge watch your favorite show.

Yes, there are power outlets onboard Megabus buses. You can generally find one or two sockets per row of seats, so be a good traveller and check if your seat neighbor might want to charge up their devices as well. With the onboard power outlets, you can charge both a computer and USB devices with a USB power adapter that typically comes with most phones and tablets.

Since Megabus might sometimes use replacement bus vehicles, not all trips are guaranteed to have power points. We recommend to bring a power bank to charge your phone for all trips over 2 hours, just in case.

What is the Megabus schedule today?

Today, Megabus makes 36 scheduled trips a day. The schedule varies depending on the route and day of week. The best way to find the exact schedule for your route is to enter a search at the top of this page.

No, Megabus does not offer will call tickets. You should purchase your tickets online and make sure you have everything you need to board before you arrive at the station.

No, Megabus does not require an ID to board its buses at this time. Of course, it is always a good idea to carry a government-issued ID whenever you hit the road.

What are Megabus’s COVID-19 policies?

Visit our COVID-19 Travel Guide to view the most up-to-date information about Megabus’s cleaning protocols and adjusted ticket change policies during the COVID-19 pandemic.

Are there bathrooms on Megabus buses?

Yes, there are bathrooms on Megabus buses. The bathrooms are pretty basic and include a toilet, toilet paper and hand sanitizer. Most bathrooms don’t have running water. As you will be using a bathroom on a moving vehicle, please use caution and hold on to a rail at all times.

Megabus does not offer meals or beverages onboard. We recommend you bring a drink and some snacks for your trip. We also suggest packing a reusable water bottle with you to reduce your impact on the environment. However, note that most buses do not allow you to bring your own alcoholic drinks.

Does Megabus offer any premium features like extra legroom or movies?

Megabus goes the extra distance to deliver premium features to its customers. 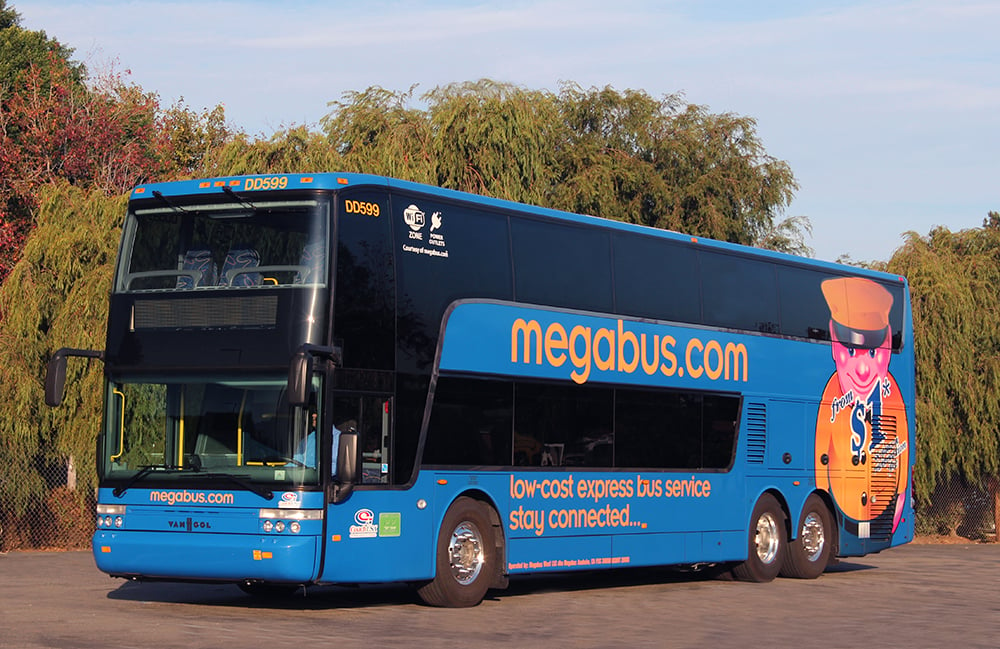 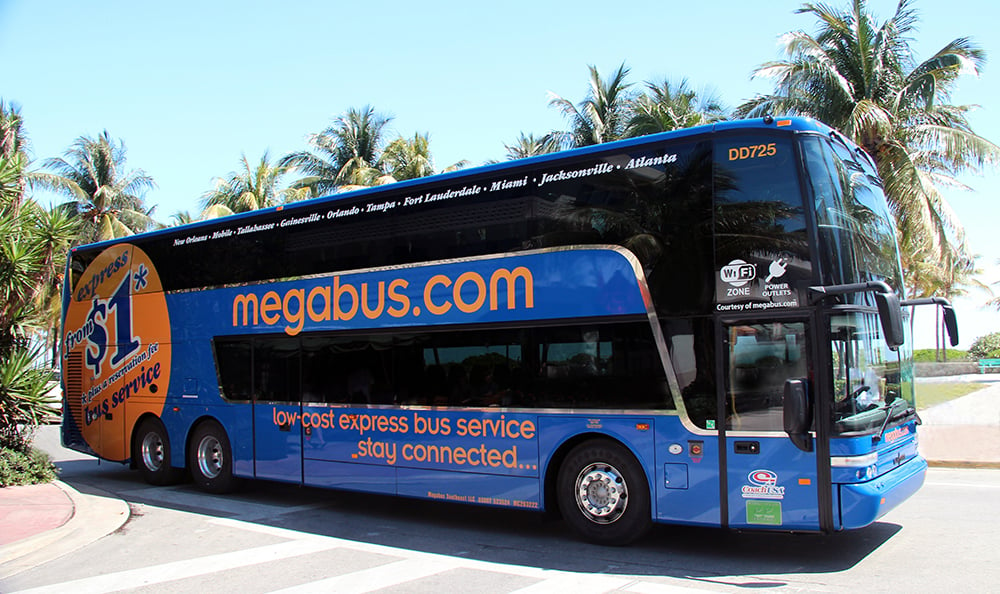 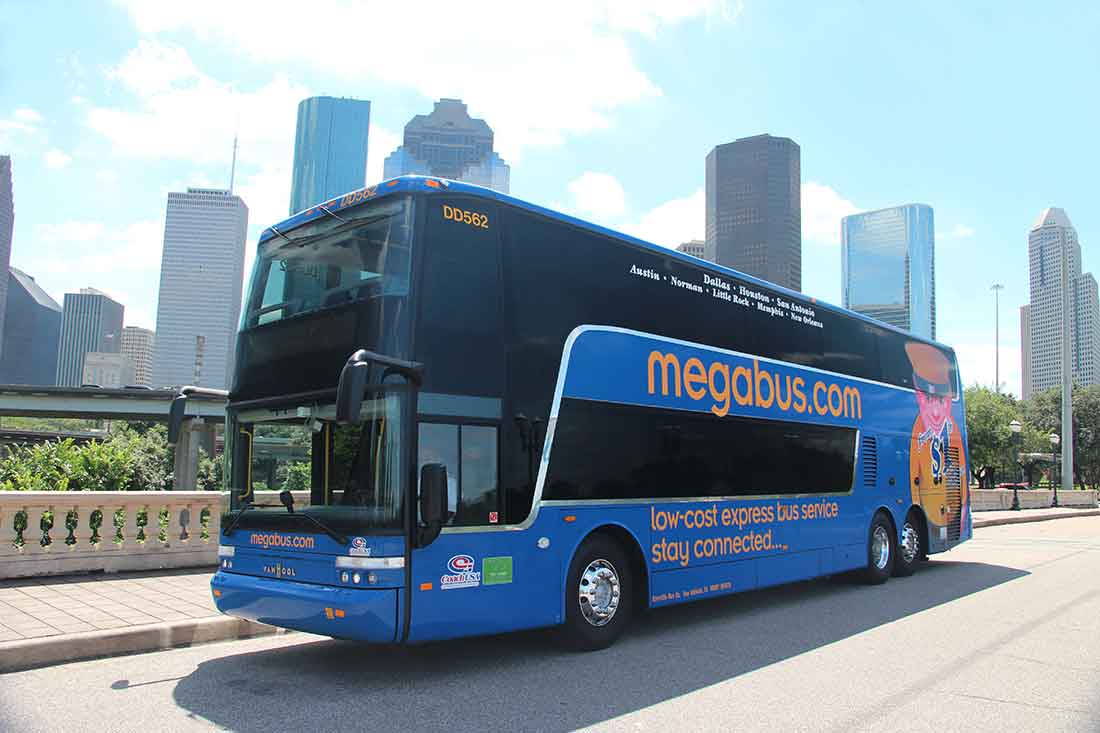 How to Read Your Megabus TicketRead more